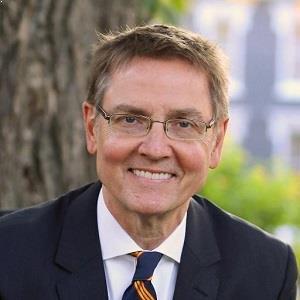 I lost my first mayor's race. I lost the primary. But we came back and won that. So I know you've got to play to win, but you can't be afraid to lose

America has always built ourselves out of adversity. All the way back to the Great Depression

It has to be understood, it has to be measured, and the investment needs to make sense, but debt on its face is not a bad thing.

Jim Gray has kept his personal life low profiled. He was married for seven years before he came out as gay in 2005. He has no children until now.

Who is Jim Gray?

Jim Gray is an American politician. He is a member of the Democratic Party. He is the current mayor of Lexington, Kentucky. Jim previously served as the city’s vice-mayor from 2006 to 2010.

He was first elected as a mayor in November 2010. He was re-elected to another four-year term on November 4, 2014.  Jim also previously served as the Chairman and CEO of Gray Construction, an engineering, design, and Construction Company headquartered in Lexington.

Talking about his early life, he was born on August 18, 1953, in Glasgow, Kentucky, USA. His birth name is James P. Gray II. He is the second of four children of James Norris Gray (mother) and Lois Howard (father).

His father died in 1972. He spent his childhood in Glasgow, Kentucky. His nationality is American but his ethnicity is Caucasian.

Jim completed his college education at Emory University in Atlanta. After that, he attended the Vanderbilt University, commuting between Glasgow and Nashville while earning a degree in history.

After university graduation, Jim Gray joined the family construction business full-time in 1975. He spent his 20 years of career in the construction industry. He then accepted an offer to become a Loeb Fellow at Harvard University’s Graduate School of Design in 1996.

Gary began his political career in 1972. He became the second-youngest person ever elected as a delegate to the Democratic National Convention at the age of 19. In 2002, he first ran for Lexington Mayor but lost the election. In 2006, he became the Vice Mayor of Lexington.

Gary ran for the United States Senate in 2016 but lost to former presidential candidate Rand Paul.

Besides politics, Jim is a successful businessman. In 2004, he became the president and CEO of Gray Inc. and the Gray Companies. He served as the president of the company until 2009.

He took an advisory role as Chair of the Board of Directors after being elected as the mayor.

This mayor’s net worth is estimated at around $2 million. Moreover, his salary as mayor is around $57k per year.

Jim Gray’s height, weight, and other body measurements are unavailable. He has light brown hair color and he has brown eyes.