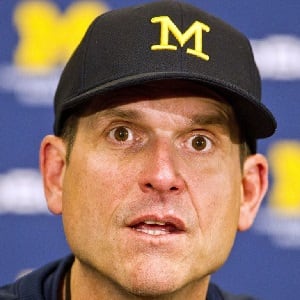 Jim Harbaugh was previously married to Miah Burke. They were married from February 1996 to 2006. The pair has three children from this relationship, Jay, James, and Grace.

Currently, Jim is married to Sarah Harbaugh. The couple married on 5 January 2008. They have four children together, Addison, Katherine, Jack, and John. The marriage is going strong as there is no news regarding any extramarital affairs at present.

Who is Jim Harbaugh?

Jim Harbaugh is an American football coach. He was previously a quarterback and is currently the head football coach of the University of Michigan Wolverines. From 1987 to 2000, he played professionally in the National Football League.

Harbaugh was born as James Joseph Harbaugh in Toledo, Ohio on December 23, 1963. He was born to parents Jacqueline M. “Jackie” and Jack Harbaugh. His father worked as an assistant football coach at nearby Perrysburg High School hence, Jim developed a keen interest in the world of football since an early age. He is of American nationality. Furthermore, he belongs to the mixed ethnic background of Sicilian, Polish, Irish, and German. He is the brother of John Harbaugh who is the head coach of AFC’s Baltimore Ravens. In addition, he also has a sister, Joani Harbaugh.

Talking about his education, Harbaugh attended Pioneer High School and later transferred to Palo Alto High School. Additionally, he also attended the University of Michigan where he played college football.

Harbaugh won the Big Ten Conference Player of the Year honors. In addition, he finished third in the Heisman Trophy race as a senior. The Chicago Bears selected him with the 26th overall pick in the 1987 NFL Draft. In his first few NFL seasons, Jim did not play regularly. He led the Bears to identical 11-5 regular-season records. He had a good season in 1995 after the Indianapolis Colts acquired him. Eventually, he retired after the 2000 season. He finished his playing career with 26,288 career passing yards, 129 touchdowns, and a 58.8 percent completion percentage.

In 2002, Harbaugh joined the Oakland Raiders staff as the quarterback’s coach. Additionally, he also took over the University of San Diego football program. After three successful years there, he had a high-profile opportunity with Stanford University. Furthermore, in January 2011, Jim was selected as the head coach of the NFL’s San Francisco 49ers. Currently, he serves as the head coach at the University of Michigan.

Harbaugh was the Citrus Bowl Champion in 2016. In 2011, he was named the NFL Coach of the Year. Additionally, he has also won the Woody Hayes Trophy.

Harbaugh has a salary of $7.5 million this season. In addition, he has an estimated net worth of around $ 15 million at present.

Harbaugh became part of a controversy in 2005 after he was arrested for DUI after running a stop sign in Encinitas, California. More recently, his team’s performance in the current season has been heavily criticized. At present, there are no rumors concerning his life and career.

Talking about his body measurement, Harbaugh has a height of 6 feet 3 inches (1.91 m). Additionally, he weighs around 98 kg. Furthermore, his hair color and eye color is dark brown.

Harbaugh is active over the social media. He has a huge number of followers on social networking sites such as Instagram and Twitter. He has more than 2M followers on Twitter. In addition, he has over 44k followers on Instagram.