Jim Irsay is a businessman and owner and CEO of the football team Indianapolis Colts.

Jim Irsay is a divorced and single man at the present time. He was previously married to the famous TV actress Meg Coyle. The couple got married in 1980.

Jim and Meg had three daughters named Carlie Irsay, Casey Irsay, and Kalen Irsay. The couple separated in 2003. Despite being separated since 2003, Meg filed for divorce on November 21, 2013. 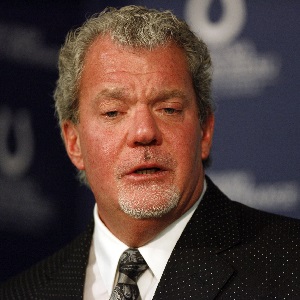 As we start to get a little bit older, boy, keep your house in order. That's the key thing. It's not about the thrills anymore. It's about contentment, about having some serenity

I have successfully dealt with my dependence and my chronic pain issues. I ask that my privacy and that of my family be respected on this health issue

That may be one of the qualities a lot of owners have. They thrive on times that are challenging and changing because you have to grasp the big picture.

Who is Jim Irsay?

Jim Irsay is an American businessman. He is the owner and CEO of the football team Indianapolis Colts of the National Football League.

He is the son of famous American professional football team owner, Robert Irsay.

Jim Irsay was born on June 13, 1959, in Lincolnwood, Illinois, United States. He is the son of Robert Irsay and Harriet Irsay.

His father was a businessman and an American professional football team owner. He owned the National Football League’s Baltimore/Indianapolis Colts franchise from 1972 until his death in 1997.

His brother Thomas was born with a mental disability and died in 1999 and his sister Roberta died in a car accident in 1971.

Irsay attended high school at Loyola Academy in Wilmette, Illinois. After high school, he attended Southern Methodist University and graduated in 1982 with a degree in broadcast journalism.

He played as a linebacker for the SMU Mustangs football team as a walk-on, but an ankle injury ended his playing career. His nationality is American and he is of Hungarian Jewish and Polish ethnicity.

After graduating from Southern Methodist University in 1982, Jim joined the Baltimore/Indianapolis as a professional staff. He was 12 years old when his father, Robert Irsay, purchased the Baltimore Colts. He was named Vice President and General Manager in 1984.

After his father suffered a stroke in 1995, Jim assumed day-to-day management with the role of Senior Executive Vice President, General Manager, and Chief Operating Officer in April 1996.

When his father died in 1997, Jim engaged in a legal battle with his stepmother over ownership of the team but later became the youngest NFL team owner at that time at 37.

He has been a very successful businessman and owner in his career and he has a net worth of 3 billion dollars.

On March 16, 2014, Irsay was arrested for suspicion of DUI and drug possession in Carmel, Indiana. According to Indianapolis Star sports columnist Bob Kravitz, Irsay had an ongoing drug problem.

Due to his addiction, he has spent a few months in rehab. He was once suspended by the NFL for six games and fined $500,000.

His hair color is Salt and Pepper and his eye color is blue. There is no information about his height, weight, or shoe size.

Also get to know more about the birth facts, education, career, net worth, rumors, height, and social media of different personalities like Dino Lalvani, Danny Zappin, and Justin Bower.

How did Jim Irsay make his money?

Is Jim Irsay a billionaire?