Author Jim Nantz is married and a father of three.

Previously, Jim Nantz was married to Ann-Lorraine Carlsen Nantz but after living together for 26 years, they got divorced in 2009.

They used to live in Westport, Connecticut with their daughter Caroline. After his divorce, he was ordered to pay $916,000 a year as alimony and child support.

Talking about his present relationship with Jim, he is married to Courtney Richards. The couple got into a married relationship on 9th June 2012 at Pebble Beach, California.

They have been blessed with two children, one daughter, Finley Cathleen Nantz (2014) then a son, Jameson Nantz (2016). The couple is living a happy married life with their children having no rumor of their separation. 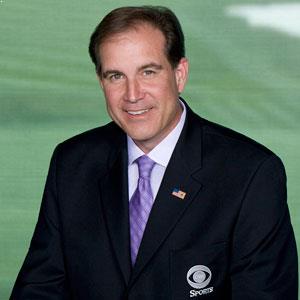 There are two things you don't do: One, you don't open an e-mail from Phil Simms in front of your kids, and, two, you don't jinx a man going for a perfect week

The 'mecca of college basketball is in Storrs, Connecticut.

Who is Jim Nantz?

Jim Nantz is an American television personality who is best known as a sportscaster, author as well as and actor.

He is mostly known for the work in the telecasts of the National Football League (NFL), National Collegiate Athletic Association (NCAA) Division I men’s basketball, and PGA Tour for CBS Sports.

He is also commonly known as the announcer on CBS’s top play-by-play team from 2004.

He was born James William Nantz, III in Charlotte, North Carolina on 17 May 1959. As of 2022, he is 63 years old. He is of Caucasian ethnicity and has an American nationality.

His mother’s name is Doris Nantz and his father’s name is Jim Nantz Jr. He was raised in New Orleans and New Jersey. He has a sister named Nancy Hockaday.

He did his schooling at Marlboro High School where he was a co-captain of a basketball team.

He was also a co-captain as well as a number 1 player on the golf club and became a member of the Bamm Hollow Country Club.

He majored in broadcasting at the University of Huston in Texas where he was honored with a Doctor of Humane Letters.

Jim Nantz started working as an anchor and sportscaster for ‘Khou Houston‘. Then he was hired as a weekend sports anchor on KSL-TV in Salt Lake City before joining CBS.

In 1985, he began working with the CBS network as a studio host for college football and basketball coverage.

Since 1989, he has anchored CBS coverage of the master tournament. Being working up with CBS, he has covered many sports reports including NCAA Final Four Men Basketball, and Steve Kerr’s Final Four of TNT Sports. He became the play-by-play announcer of The NFL on CBS in 2004.

In 2014, Nantz along with his partner Phil Simms called Thursday Night Football games by making a deal with both CBS and NFL networks.

He has won Emmy Award for Outstanding Sports Personality, the Ambassador Award of Excellence by LA Sports, and had been honored with NSSA’s National Sportscaster.

Besides his sportscaster career, Nantz has also made a guest appearances on various television series. He published his first book ‘Always By My Side-A Father’s Grace and a Sports Journey Unlike Any Other in May 2008.

His success in the career path paid him well financially. Although his salary has not been disclosed his net worth is estimated to be $15 million as of 2022.

He has also launched a private wine label ‘The Calling’ being partnered with wine producer Peter Deutsch. Nantz has contributed financially to politics and he is also a member of the Republican Party.

Jim Nantz has a height of 6 feet 3 inches and weighs 75 kg. He has brown hair and blue eyes.