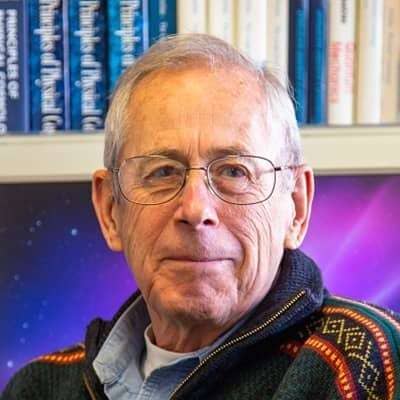 My new book is an attempt to see the commonality around science, sociology and philosophy.

Professor Peebles is married to Alison. They are presently living in Princeton, New Jersey. The couple shares a mutual interest in gardening. They are fond of exploring nature. Further details regarding his personal life, family are conceived.

Who is Jim Peebles?

Jim Peebles is a Canadian-American astrophysicist, astronomer, and theoretical cosmologist. Jim Peebles is honored as one of the fathers of modern cosmology.

He is currently the Albert Einstein Professor of Science, Emeritus, at Princeton University. He won the Nobel Prize in Physics 2019 for theoretical discoveries in physical cosmology.

Jim Pebbles, birth name Phillip James Edwin Peebles on April 25, 1935. Talking about his age, he is 86 years old as of today. According to western astrology, his zodiac is Taurus.

The name details of his parents and siblings are unknown to date. but some of the sources, mention his father was in a grain business.

Describing his educational background, Peebles received a bachelor’s degree in 1958 from the University of Manitoba. Afterward, he continued his studies at Princeton University in the United States. In 1962, he received a doctorate from the same University. He continued to be there as a result he is now Professor Emeritus of Science.

Jim Pebbles have an average height, weight, and body stats but his exact details are not available at the moment. He has fair skin featuring his blue eyes and grey hair. His eyes were continuously drained by his long hours of research thus he ended up wearing spectacles.

At the very beginning, Peebles worked on cosmic microwave background radiation (CMBR)and its connection with the aspects of The Big Bang Theory. He became an assistant professor at Princeton University in 1965.

Next, in 1972 he was working full time there. He became the Albert Einstein Professor of Science in 1984 and a professor emeritus in 2000.

By his research, he explained that the temperature of the universe had a great effect on the amount of helium produced. He opposed the belief that the heavier chemical elements could have been made in the big bang.

In 1970 Peebles along with graduate student Jer Yu considered the CMB’s angular power spectrum and its relation with the matter density of the universe. Later in 1982, he became one of the first cosmologists to bring out the signification of cold dark matter in the formation of galaxies.

In 1965 Peebles wrote an article about the formation of galaxies. Accordingly, galaxies are formed by the expansion and cooling of the universe. The gravity helps overcome the counteracting effect of the hot thermal blackbody radiation that filled the universe.

His estimated net worth is around $ 5 Million (USD). This includes his earnings from research and income from being a University professor. Furthermore, the exact details of his per year earnings or monthly salary are unknown.

Well, most of his life he has been in a research field. Maybe because of his busy schedule or because of his lack of interest, he manages to keep himself away from rumors.