Jim Sciutto is a CNN Anchor & Chief Nat Sec Correspondent, Author, “The Madman Theory: Trump Takes on the World.” Jim is married to Gloria and has three kids. 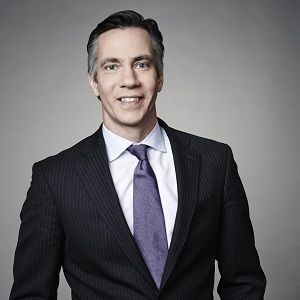 That's the key question for the foreign leaders and diplomats, i think the simplest answer is, they don't know. They don't know yet. And that's a problem

That's a real danger to (Estonia), so they need reassurance, but then they'll hear a contradictory statement from the President himself, and that worries the heck out of them

You have public contradiction between the head of state and some of his most senior advisers on the most central national security issues.

Jim Sciutto is in a very happy space regarding the relationship. He is married to Gloria Riviera since October 27, 2006, in the Roman Catholic Church of St. Ignatius Loyola in New York. His wife Gloria is an ABC News correspondent.

They have been keeping secret about their children to date. Jim always has been a one-woman man. There is no news of him being in link with any other woman in his life. This loving couple has been married for 15 years and still, there are all rainbows and blossoms going around their relationship. ‘

The couple has three children; a son Tristan, a son Caden who was home-delivered by dad Jim in London, and 1 daughter who was born in July 2015.

Who is Jim Sciutto?

Jim Sciutto is an American Journalist serving as a correspondent in a Chief National Security. His work includes foreign policy, the military, terrorism, and the intelligence community.

Regarding his work, he had worked as an American diplomat in Beijing, as Chief of Staff for US Ambassador Gary Locke. Previously, he was also a former ABC News’ Senior Foreign correspondent, based in London.

Jim has been popularly known for his good works and dedication towards his work but still, his good looks and perfect height have always been the plus point.

Sciutto’s father Ernest Sciutto was a US Navy veteran who passed away in the year 2007. His mother was from Ireland

Jim stepped in this career as a moderator and producer of the ‘Public Broadcasting Service’ program. He also worked in the weekly public affair show ‘The Student Press’. He had also worked as a  Hong Kong Correspondent for the ‘Asia Business News’.

During the work time in the news show, he covered many stories in many places like Chima, Laos, Singapore. In 1998, he got the chance to get associated with ABC News in Chicago, later on, he was transferred to Washington, D.C.

In 2006, he was promoted and made Senior Foreign Correspondent and lead reporter on ABC News. Jim has also worked as an American diplomat in Beijing. After working for some years as a diplomat, he was hired as ‘Chief of Staff’ for the US Ambassador.

At the present time, he is working as a Chief Nationality Correspondent at CNN where he reports and provides all information related to US National Security since 2013.

Jim has been honored with many awards for his great work throughout his career such as ‘Edward R. Murrow Award’ in 2009, ‘Emmy Awards’ for two years in 2004 and 2005, ‘George Polk Award’ for covering reports from Myanmar.

As of working as an American journalist for so many years, he has a net worth of $10 million.

Jim’s height is 6 feet and 1 inch. His weight is not known but he has a slim build. His hair is black and his eyes are brown.

Jim Sciutto does the emergency delivery of his and his wife’s second child. Scroll down to know about his relationship!