There is no other information about his wife and children. There are no rumors of divorce between them. As of now, they are living happily together. 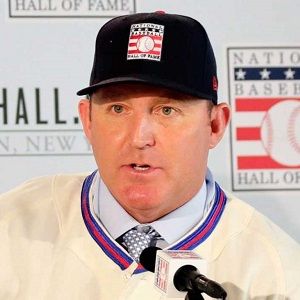 Is my ability what it was at, say, 25 or 30 years old? Probably not, but I like to compete. I like to go out and play the game hard.

Who is Jim Thome?

Jim Thome is an American former professional baseball player who played 22 seasons in Major League Baseball(MLB) from the year 1991 to 2012.

He was born on 27th August 1970 in Peoria, Illinois. He is the son of Chuck Thome Jr. and Joyce Thome. Similarly, he has five siblings of which three sisters are Lori Larson, Kari Thome, and Jenny Thome Ellis.

His two brothers are Chuck Thome III and Randy Thome. He learned to play baseball from his father on a tennis court

Likewise, he belongs to American nationality and his ethnicity is mixed English and German.

Talking about his education, he attended Limestone Community High School. He achieved all-state honors in basketball and as a baseball shortstop at his high school.

Similarly, he enrolled at Illinois Central College where he continued his baseball and basketball careers.

Jim Thome played for six different teams mostly for Cleveland Indians, during the 1990s and early 2000s. He hit 612 home runs during his career the eighth-most all-time along with 2,328 hits, 1,699 runs batted in (RBIs), and a .276 batting average. In their early career, he played third base before becoming a first baseman.

Similarly, with the Indians, he was part of a core of players that led the franchise to two World Series appearances in three years during the mid-1990s.

He spent over a decade with the Tribe, before leaving via free agency after the 2002 season, to join the Philadelphia Phillies, with whom he spent the following three seasons.

Likewise, after stints with the Los Angeles Dodgers and Minnesota Twins, he made brief returns to Cleveland and Philadelphia, before ending his career with the Baltimore Orioles.

After retiring, Jim Thome accepted an executive position with the White Sox. His strength was power hitting.

As of 2017, he is the career leader in walk-off home runs with 13. In the year 2018, he was inducted into the National Baseball Hall of Fame in his first year of eligibility.

He won the American League (AL) Comeback Player of the Year Award in the year 2006. Similarly, he was honored with two Marvin Miller Man of the Year Awards and a Lou Gehrig Memorial Award for his community involvement.

The net worth of Jim is around $80 million. He earns a huge amount of money from his baseball career. Similarly, he has an annual salary of $1.25 million. Likewise, he bought a new house in Burr Ridge.

He paid $4.6 million for the seven-bedroom, seven-bath home on two acres, which has a tennis court, theater, paneled library, and seven-car garage.

Likewise, his six-bedroom home in Hinsdale is up for sale for $3.8 million, the same price he paid for it in 2006.

There are no big rumors and controversy about Jim. He is successful in maintaining his life free from rumors.

Jim Thome has a height of 6 feet 2 inches and their weight is 113 kg. Similarly, his hair color is brown and he has hazel color eyes. There is no information about his other body measurements.

You may also like to read Matt Franco, Javier Lopez, and Andrew Benintendi.