Jimmy Iovine is a married guy. His wife’s name is Liberty Ross. Liberty is a famous model. The wedding ceremony took place on February 14, 2016.

Jimmy met Liberty through her brother Atticus. The lovebirds dated for a couple of years before getting wed. Reportedly, they started dating in 2014. Currently, they are living happily together.

Before this marriage, he was married to Vicki Iovine. Vicki is a talented writer and a model. They got married in 1987. Together, they had four children. They are Jade, Jeremy, Jamie, and Jessica.

But even after a long 23 years of marriage, things did not work out. And they got divorced in 2009.

Before this marriage, he was in a romantic relationship with many other beautiful women. 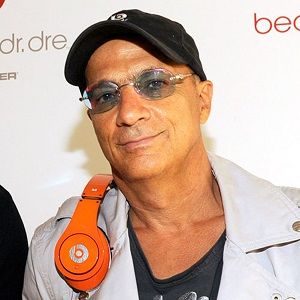 Everyone's frightened. It's how you deal with that fear. It's very, very powerful. And what you've got to do is get it as a tailwind instead of a headwind. And that's a little bit of a judo trick in your mind. And once you learn that, fear starts to excite you. Because you know that you are going to enter into something and try it and risk.

You try to do the best with what you've got and ignore everything else. That's why horses get blinders in horse racing: You look at the horse next to you, and you lose a step.

I didn't have any sophistication. I didn't really have any great taste or anything like that. I was just a kid from Brooklyn. But what I learned is the why, the how. The work ethic.

Who is Jimmy Iovine?

New York-born Jimmy Iovine is an apex name in the music industry. He is a record producer, music executive, and entrepreneur.

Presently, he works for Apple Inc. He is the co-founder of “Beats by Dr. Dre” and co-founder/president of “Interscope Geffen A&M Records.”

Jimmy was born in Brooklyn in the state of New York in the United States. He was born on March 11, 1953, and has Italian ethnicity.

The name of his father is Vincent ‘Jimmy’ Iovine.

He was a longshoreman, who worked in docks. Similarly, his mother worked as a secretary. He grew up in New York in his early life. He spent his childhood in a working-class family environment.

For his education, at first, he went to some Catholic school. Afterward, he joined John Jay College of Criminal Justice in New York. Later he dropped out to pursue a career in music production.

Jimmy Iovine is involved in multiple professions. He is an entrepreneur, record producer, music executive, musician, and also a film producer. He started working in the studio since 1972. In 1973, he entered the music industry.

In the beginning phase of his career, he worked as a recording engineer for John Lennon. Afterward, he collaborated with big names like Bruce Springsteen, Patti Smith, U2 and others from the studio production part.

Eventually, he also helped his then-girlfriend, Stevie Nicks to release her first album. He co-founded Interscope Records, which is a music recording company in 1990.

He worked with several artists like Tupac, Eminem, Lady Gaga, and others. Till now, he is linked to the production of 250 albums.

He took his company to the greatest height of success. Additionally, in 2008, he co-founded a company, “Beats” by Dr. Dre. Beats produce high-quality headphones.

In 2014, Apple Inc. purchased Beats Electronics. Since then he started working for Apple. Furthermore, he is also a TV personality. He served as a mentor for American Idol from 2011 to 2013.

Jimmy from his work at Apple earns a lot of money as a salary. Moreover, he makes a massive profit from his business and company, ‘Interscope.’

Consequently, his net worth is somewhere around $950 million but his salary is not revealed as of 2022.

Talking about his rumors and controversy, Jimmy Iovine became part of the controversy in 2015.

The comment about a girl’s stereotype of sitting around and talking about boys gave a reason for people to criticize him.

Presently, he is away from any rumors and controversy.

Moving towards his body measurements, Jimmy Iovine has an average height of 5 feet 5 inches.

His eye color is light brown and he rocks with a clean shaved head. There is no information about his weight.