Updated On November 18, 2022 | Published By: Stanley Williams
Share this
Married 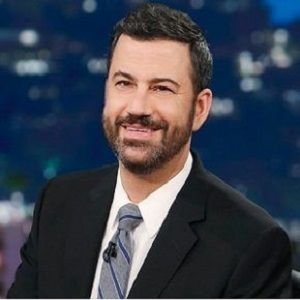 I'm always looking to the next thing. There are always hurdles, whether it's the White House dinner or hosting charity events or that night's show: Until they're over, I worry, then I move right on to the next thing. It's hard for me to enjoy the moment. I'm just thinking about not failing.

No matter what Sarah Palin and these geniuses she surrounds herself with try to tell you, climate change is not a liberal versus conservative thing, but the people who profit from ignoring it want you to believe it is.

The truth is, we have this idea that late night is about creativity and being cool, but that's not our job. Our job is to get as many people watching the commercials in between our show. That's the reality of it.

What is the relationship of Jimmy Kimmel?

After getting a divorce from Gina, he started dating Sarah Silverman who is also a comedian. Kimmel and Silverman dated for 7 years but before getting married they got separated in 2008.

After onward Kimmel started to date his co-head writer of the talk show ‘Jimmy Kimmel live‘ Molly McNearney and the couple got engaged in 2012.

Kimmel and McNearney got married on 13 July 2013 and they have two children, a daughter Jane Kimmel and a son William John Kimmel.

Who is Jimmy Kimmel?

Jimmy Kimmel is an American television personality. He is best known for hosting the late-night talk show ‘Jimmy Kimmel Live.

Talking about his early life, he was born on 1967 November 13. He experienced his childhood in Brooklyn, New York.

Born James Christian Kimmel but later on, moved to Las Vegas with his family when he was nine years old. By religion, he is a roman catholic and has volunteered as an altar boy for his local Roman Catholic Church.

His father Jim worked as an executive for IBM and his mother Joan worked as a homemaker. He is the eldest son and has two brothers Joan Kimmel and James John Kimmel. Kimmel went to Ed W.

Clark High school and after then he attended two universities, the University of Nevada, Las Vegas for a year, and Arizona State University for two years.

He failed to gain a college degree but he received an honorary degree from UNLV in 2013.

Jimmy Kimmel started his career as a radio host while he was at UNLV where he hosts a Sunday night interview.

After onward he started working on radio stations like KZok-FM in Seattle, WRBQ-FM in Tampa, and KCMJ in Palm Springs.

He turned professional at the age of 21. Later on, he appeared in hosting a television game show ‘Win Ben Stein’s Money’ which even got him and his partner, Stein, an Emmy award for the best game show host. He started to host many television shows.

Jimmy Kimmel broke the Guinness world record for most miles traveled in a five-day workweek.

He has an estimated salary of $10 million which he earns through his show and his net worth is around $85 million living a luxurious lifestyle and showing his worth in the industry as of 2022.

Is Jimmy Kimmel involved in any rumors and controversies?

The Huge controversy came down knocking on Mr. Kimmel when he told that the U.S. should fix its financial problems by killing all the people in China and he as well as his ABC Network was asked for apologies.

Moving towards his body measurements, Jimmy Kimmel has a good height of 6 feet (1.83m).

He has dark brown hair color and his eyes are brown.

His bodyweight is 82kg. There is no information about his shoe size or dress size.