James Patrick Page known as Jimmy Page is a songwriter and record producer.

Jimmy Page was in a live-in relationship with his partner Charlotte Martin. They were together from 1970 to around 1983. They had a daughter named Scarlet Page together who was born in 1971.

Similarly, he was in a relationship with Lori Mattix. He married Patricia Ecker from the year 1986 to 1995. They have a son named James Patrick Page who was born in April 1988.

After that, he married Jimena Gomez-Paratcha. Similarly, he adopted her oldest daughter Jana. They have two children Zofia Jade(1997) and Ashen Josan(1999). But they divorced in 2008.

At present, he is dating Scarlett Sabet from the year 2015. She is an actress and poet. 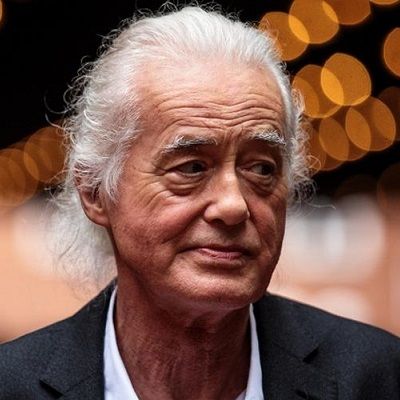 My finger picking is sort of a cross between Pete Seeger, Earl Scruggs, and total incompetence.

I believe every guitar player inherently has something unique about their playing. They just have to identify what makes them different and develop it.

Who is Jimmy Page?

James Patrick Page known as Jimmy Page is a songwriter and record producer. He achieved international success as the guitarist and founder of the rock band Led Zeppelin.

Similarly, he was inducted into the Rock and Roll Hall of Fame twice and once as a member of the Yardbirds.

He was born on 9th January 1944 in Heston, Middlesex, England. As of 2021, he is 77 years old. He is the son of James Patrick Page(father) and Patricia Elizabeth Gaffikin(mother). There is no information about his siblings.

Besides, he belongs to British nationality and his ethnicity is mixed (Irish, English, and Welsh).

Talking about his education, he attended Surrey Institute of Art & Design, University College.

At first, he has started as a studio session musician in London. By the mid-1960s alongside Big Jim Sullivan, he was one of the most sought-after session guitarists in Britain. Likewise, he was a member of the Yardbirds from the year 1966 to 1968.

Similarly, in late 1968, he founded Led Zeppelin. He is widely considered to be one of the greatest and most influential guitarists of all time. Likewise, Rolling Stone magazine has described him as the pontiff of power riffing.  He was ranked number three in their list of the 100 Greatest Guitarists of All Time behind Jimi Hendrix and Eric Clapton.

Likewise, in the year 2010, Jimmy Page was ranked number two in Gibson’s list of Top 50 Guitarists of All Time. In the year 2007, he was ranked number four on Classic Rock’s 100 Wildest Guitar Heroes. Moreover, he was inducted into the Rock and Roll Hall of Fame twice. He was once a member of the Yardbirds (1992) and once a member of Led Zeppelin (1995).

As of 2022, the estimated net worth of Jimmy is around $200 million. He sold his album The Firm and made an estimated amount of $565,000. Similarly, he sold copies of his album Coverdale and Page and made $1.3 million.

Likewise, he has a Tower House Victorian castle in London.

Talking about Jimmy Page’s body measurements, he has a height of 5 feet 11 inches and his weight is 75 kg. Similarly, he has white hair color and black color eyes.