Who is the husband of Jo De La Rosa?

She got married to her fiance, Taran Gray, a composer on May 27, 2022. They are officially husband and wife now.

Their wedding took place in the backyard at a private residence in the Palos Verdes Estates in the presence of an intimate group of friends and family. Some of her co-stars from RHOC attended her special day.

They met for the first time in June 2020 after connecting on Hinge. Since then they dated virtually for three months and started mentioning each other as a boyfriend and girlfriend.

Then in August 2021, Jo got engaged to Taran Gray and also confirmed the news by posting w a sweet photo with a lovely caption. In the photo, she was seen flashing her engagement ring.

In 2006, Jo confirmed her engagement with Brave househusband, Slade Smiley. Unfortunately, they ended their engagement in 2007 due to personal issues.

Then, she dated a man named Daniel Harman and confirmed her breakup with him via her Instagram stories. 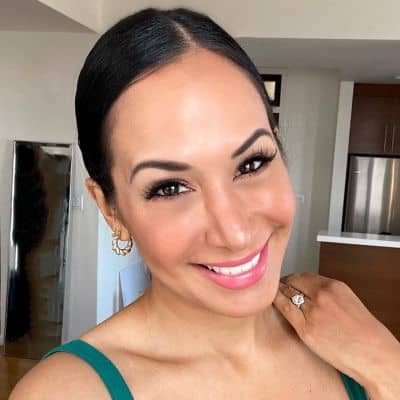 Who is Jo De La Rosa?

Jo De La Rosa is a reality star. She is famous for being the former Real Housewife of Orange County and a member of Bravo Spin-off Date My Ex: Jo and Slade.

She is a pop musician who released her album, ‘Unscripted’ in 2007.

Jo De La Rosa was born in Peru on September 9, 1979. De La Rosa is 43 years old as of 2022 and holds Peruvian nationality. According to the astrological chart, she has a Virgo birth zodiac.

Moving toward her educational life, she completed her schooling at Mission Viejo High School. Later, she graduated her graduation from the University of California-Irvine with major in English and Comparative Literature.

There is no detailed info disclosed about her parents or siblings.

In the beginning, she worked in the insurance industry and met Slade there.

In total, the series has aired its sixteen seasons as it is about the personal and professional lives of some women living in Orange County, California.

She faced several challenges while building the relationships with Slade’s two sons named, Gavin and Grayson.

After the popularity and success of the show, its franchise and spin-off series based in Atlanta, New Jersey, D.C., Beverly Hills, Potomac, Dallas, Salt Lake City, Dubai, and Dallas was created. Aso the spin-offs Date My Ex: Jo & Slade and Tamra’s OC Wedding have been created.

On July 21, 2008, the spin-off of the show, ‘Date My Ex: Jo & Slade aired on Bravo Tv. The show plotted the dating life of  The Real Housewives of Orange County former member, Jo De La Rosa.

On September 8, 2008, the show ended after airing its nine-episode in the first season. In the show, the help and support she got from her ex-fiance Slade Smily and best friends, Myia Ingoldsby and Katy Metz have been depicted.

According to Celebrity Net Worth, Jo De La Rosa’s net worth is estimated to be around 100K USD. The payment she gets monthly/ yearly or per episode has not been disclosed.

Currently, Jo De LA Rose is in the spotlight after getting married to the composer, Taran Gray on May 27, 2022.

Many websites have covered the news of her wedding and fans seems to be enthusiastic to know about her wedding venue and other details.

Adding more, she has a pair of black eyes and hair of the same color as well.

Similarly, she is also available on TikTok where she uploads lip-sync, dancing, lifestyle as well as dancing videos. Her Tiktok account has around 2.4K followers and 76.4K likes.

The reality star also has a self-titled Youtube channel, that has garnered over 2.29K subscribers.