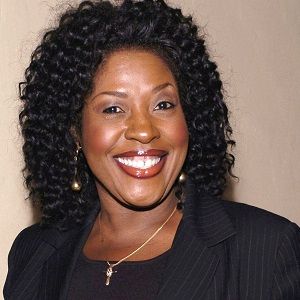 I like to cook. We always sit down together, my daughter and I, and have dinner - baked chicken breast or a piece of fish with green beans, rice or potatoes. And I love pasta

I'm not on a diet or anything. I do watch what I eat, though. But what I want, I get it. I learned when I was at 280 pounds, when I was in that life before, denial was not the answer

I eat a lot of ice - isn't that ridiculous? I chew on ice, and I have maybe two diet sodas a day.

The veteran American actress, Jo Marie has been married four times in her life.

Her first marriage was with Marc France in 1980. They carried their married life for almost seven years and also welcomed a daughter Chantale France. Later in 1987, they got divorced. She stayed single for almost six years and finally got married to Rodney Noble on 17 April 1993.

However, her second marriage also came into the problem and the couple separated in 1998. In the same year, she tied the knot with her boyfriend Landrus Clark and divorced after six years of marriage in 2004.

Additionally, Jo exchanges her vows with Leonard Downs on 16 December 2007. Since their marriage, the married couple has been maintaining a perfect relationship with them and currently living beautifully.

Who is Jo Marie Payton?

Jo Marie Payton is an American actress as well as a singer. She rose to prominence from the ABC/CBS sitcom Family Matters.

Furthermore, she also has some notable works in The Proud Family, Will & Grace, The Flight Before Christmas, and a few more. In addition, she has also gotten several nominations such as Image Award, and a couple of Vision Award.

Jo Marie was born on August 3, 1950, in Albany, Georgia, USA. Talking about her nationality, she is American and her ethnicity is unknown. She grew up in Opa-Locka, Florida along with her parents. Furthermore, she is the daughter of Frankie Bell Payton and Driscoll Payton.

From the beginning of her childhood, she had a keen interest in acting and began to perform stage shows from a very early age. Moving towards her education, she attended North Dade Jr./ Sr. High School and Miami Carol City Senior High School. Later, she completed her graduation from Albany State University.

Jo Marie began her career as an actress back in 1982. She made her acting debut in the 1982 TV series The New Odd Couple. Soon after that, she appeared in Small Wonder in 1986 and 227 in 1987. In the same year, she rose to fame as she starred as the elevator operator on the ABC sitcom Perfect Strangers. Furthermore, she again stole the limelight after featuring in 1989 sitcom, Family Matters.

Back in 1998, she landed the role of Jamie’s mother in the hug hit The Jamie Foxx Show followed by 7th Heaven and Wanda at Large. Moreover, the legendary TV actress has also notable roles in TV series such as The Parkers, The Proud Family, The Glades, Will & Grace, The Flight Before Christmas, and a few more. Besides this, Jo Marie has also hosted her own showSecond Chance with Jomarie Payton. In addition, she has also co-hosted the 15th Annual NAACP Theatre Awards with Glynn Turman.

Being a veteran TV actress, she pockets a handsome amount of money from her profession. Currently, she has a net worth of $4 million.

So far, Jo Marie has not won any awards in her career. Although, she has also gotten several nominations such as Image Award, and a couple of Vision Award.

As of now, there are no rumors regarding her personal and professional life. Moreover, she has never faced any controversy in her career to date. It seems she has full focus on her work rather than stuck in any controversy.

Jo is not active on social media at all. As of now, she doesn’t hold any of these social accounts such as Instagram, Facebook, and Twitter.