Joan Jett is possibly single (as of 2020). She wants to focus on her career to get success and achievement in her life. she seems happy living a single life. 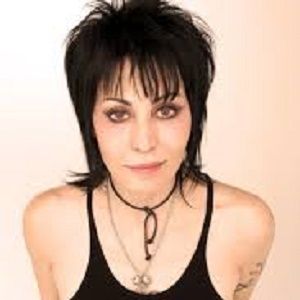 [in "Budget Living" magazine, on the symbolism of two of her tattoos] The triangle on my chest represents the divinity of myself and others. The band around my arm represents the creative essence of life in a swirl of positive and negative forces.

[asked what would people find unique about her] That I'm not mean.

I think there's nothing better than seeing a three-chord straight-up rock 'n' roll band in your face with sweaty music and three-minute good songs.

I don't want to lessen my own achievements, but it's just not that difficult [to play in a band]. If you're in good health and like to travel, I don't see why more women don't automatically want to do it.

Who is Joan Jett?

Joan Jett is a popular songwriter, composer, musician, record producer, occasional actress, and an American rock singer who is best known for her work as the frontwoman of her band, Joan Jett & the Blackhearts.

She is also known for her earlier founding and performing with the Runaways, which recorded and released the hit song “Cherry Bomb”.

Besides, she has some nicknames also The Queen of Rock ‘n’ Roll, The Godmother of Punk, and The Original Riot Grrrl.

The popular songwriter was born on September 22, 1958, to James Larkin and Dorothy Jett Larkin in Philadelphia, Pennsylvania, USA.

Her mother was a secretary and her father was a Protestant. She is the eldest of three children of James Larkin and Dorothy Jett Larkin.

After her parents divorced, she changed her name to Joan Jett, taking her mother’s maiden name as her professional and legal name. The family attend church but were not particularly religious.

She has a keen interest in learning folk songs since her childhood.

Joan Jett started her career by founding a member of the Runaways, alongside drummer Sandy West. Later  Jackie Fox, Lita Ford, and Cherie Currie soon joined up to complete the band, creating the classic lineup.

Jett first heard the song “I Love Rock ‘n’ Roll” when she saw Arrows perform it on their weekly UK television series Arrows in 1976. From 1975 until they disbanded in the spring of 1979, they produced five albums.

Jett was in England pursuing a solo career in 1979, where she recorded three songs there with the Sex Pistols’ Paul Cook, and Steve Jones. Jett formed the Blackhearts with Laguna’s assistance Laguna recounted, “I told Joanie to forget the band and support herself on the advance money. The band was able to keep touring solely due to Laguna drawing on advances from outside projects throughout 1980.

A concert at the Palladium in New York City proved to be a turning point. The band had a song on the Days of Thunder soundtrack, “Long Live the Night”, written by Jett with Randy Cantor and Michael Caruso in 1990.

she was Long Island Music Hall of Fame of the class of 2006. On behalf of animal farewell, she got Nanci Alexander Activist Award in 2012. In 2014, she was awarded the AP Icon Award.

Besides that, she has got the 2014 Golden God Award and was Rock and Roll Hall of Fame inductee class of 2015.

She is refused either to confirm or deny rumors that she is lesbian or bisexual.

As well as she also addressed the rumors in 2006, that she is an open lesbian by saying, “I never made any kind of statement about my personal life on any level. I never made any proclamations”

Joan Jett is good-looking with black hair and with brown light eyes.

Also, read the salary, career, net worth, controversy, rumors, and the bio of Denise Van Outen, and Joe Wilkinson.