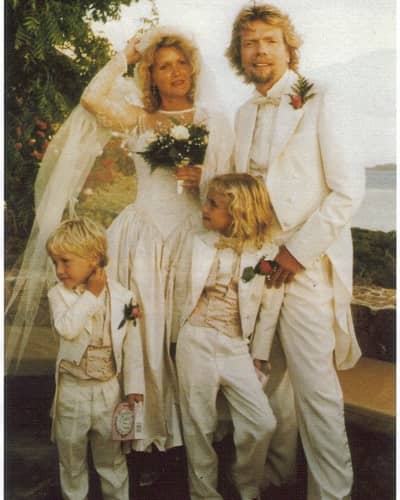 Joan Templeman met Richard Branson at The Manor which was his live-in recording studio for Virgin Records on 7th February 1976. Joan said,

“I often make up my mind about someone within 30 seconds of meetings them, and I fell for Joan almost from the moment I saw her. Joan was a down-to-earth Scottish lady and I quickly realised she wouldn’t be impressed by my usual antics.”

Joan worked at the antique shop in Notting Hill named Dodo. It was close to his Virgin office at Vernon Yard. Gathering all the courage he had, Richard went outside her shop and walked in. Joan used to sell old signs and advertisements and the store belonged to Liz. Branson pretended that he was fascinated by Liz and he started visiting the shop more often.

With his every visit, he was astonished by the impressive collection of old hand-painted tin signs that advertised from bread to cigarettes. Joan had a hand in setting his biggest-selling album Now That’s What I Call Music’s name. They walked down the aisle on 20th December 1989 at a grand wedding in Necker Island.

Also read Is Arie Luyendyk Jr having another baby with their wife Lauren Burnham? Know about her miscarriage, married life, net worth, biography

Joan Templeman and Richard Branson have three children. Their daughter Clare Sarah died after 4 days of birth in the year 1979. Their daughter Holly Branson is the eldest child. She dreamed of becoming a doctor at a young age. She joined the Virgin Group founded by her father in the year 2008 as a member of the Virgin Management Leadership team.

Holly graduated from the University College London with a degree in Medical and Physiology. Also, she worked as a junior doctor at Chelsea and Westminster Hospital. Likewise, she co-authored her first book WEconomy: You Can Find Meaning, Make A Living, and Change the World with Marc and Craig Kielburger.

Likewise, their son Sam Branson is the youngest child who is passionate about adventure and the environment. Sam is the founder of a production company named Sundog Pictures which was founded in 2012.

Joan Templeman was born on 6th July 1947 in Scotland, United Kingdom. She is 72 years old at present. She is the daughter of a ship carpenter and grew up along with her six siblings. When she was a child, she was jolly and was very confident.

Templeman was from a rich family but she was ambitious and had her own goals to achieve. She took various kinds of jobs and was financially stable from an early age.

Also read Natasha Liu Bordizzo, the rising star from Australia: Know about her age, early life, childhood, and career in acting and modeling!

Joan Templeman met the rock group member Nazareth Ronnie Leahy in 1966 in Glasgow. Ronnie got married soon after and moved to London. They remained married to each other for more than 12 years until she met Richard.

Even though they were married for more than 12 years they did not have any children.

Richard Branson is an English business magnate, philanthropist, and investor. He is the founder of Virgin Group, which controls more than 400 companies. He has an estimated net worth of US$5.1 billion according to Forbes magazine. Read more bio…