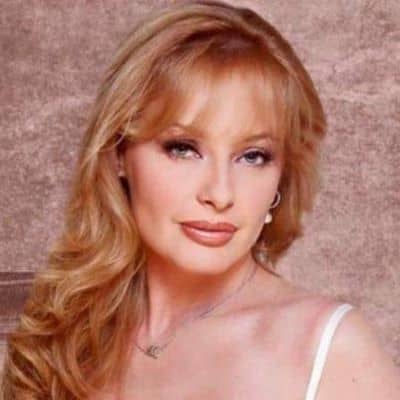 Joana Benedek has not stated anything about her personal life and romance. She is possibly single for now. But according to some sources, she had at least one previous relationship.

Who is Joana Benedek?

Joana Benedek is a Mexican actress of Roman origin. Joana persuaded her career in the modeling field and later became an actress.

Mainly, she is known for the role of Catalina Lizárraga Miranda in the TV series Angela(1998-1999).

Actress Joana was born on 21st January 1972 in Bucharest, Romania. Her star sign is Aquarius.

Joana’s family name is Godeanu. Her father’s name is Zoltan Benedek, while her mother’s name is not recognized. She has a sister named Raluka.

At the young age of 15, Joana left her parents and moved to Venezuela to stay with her relatives. She was studying in Caracas but she left her studies after she got a modeling contract.

Joana has an oblong-shaped facial structure. Her facial features include her plump lips, blue eyes, and curly blonde hair.

Joana accumulated a net worth of $1 million to $5 million inclusive of her house, car, and other assets. Her main source of earnings and income is her acting plus modeling career.

Firstly, a modeling agency invited her to work as a model and her natural beauty landed her a career on ‘the catwalk’. In the second place, she acted in the “Pecado de Amor” for 18 months as a soap opera actress.

In 1997, her agent sent some pictures to New York to get a make-up franchise. Staying in New York, Joanna took dramatic art classes at Susan Grace Academy.

She has hosted the ‘Lo Nuestro Awards’ ceremony. As a result, she got a lot of amazing acting work down the line.

In the year 1989, she took off her career with the role of Zoraida, the antagonist in Rubi Rebelde. Since then she played many antagonist parts and supporting roles in the television industry itself.

According to some sites, Joana disappeared from the Television industry for not getting a suitable role. Well, will she return with a new upcoming or not is yet to decide.