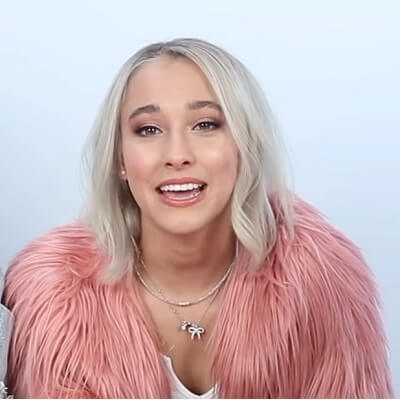 Joana Ceddia is currently single. She has stayed private regarding her love life and has not revealed any of the guys she has dated so far. However, she is still just 19.

Who is Joana Ceddia?

Joana Ceddia is a Canadian Youtuber. Known for her quirky and ironic sense of humor, she posts different kinds of videos including tutorials, DIYs, and vlogs, and has over 3.25 million subscribers on her self-titled Youtube channel.

Joana Ceddia was born as Joana Campos Ceddia on June 21, 2001, in Brazil. As of 2020, her age is 19. She was born to parents Denilce Campos (mother) and Rolando Ceddia (father). Her mother, Denilce was a gymnast and represented the Brazil national team at the 1980 and 1982 South American Artistic Gymnastics Championships and won gold for her country in the team all-around both times. Her father, on the other hand, is an associate professor at the School of Kinesiology & Health Science at York University.

She moved to Toronto, Canada with her parents when she was very young. Growing up, she loved swimming and participated in competitive school swimming winning an OFSAA gold medal. Moreover, she also loved painting and still paints in her spare time. Her ethnicity is Brazilian.

Talking about her educational background, she went to York Mills Collegiate Institute, Toronto.

Joana Ceddia started her YouTube in June 2018 with a video titled, ‘Me getting frustrated with paint: MY FIRST YOUTUBE VIDEO!’.  She had started her channel after suffering from an ankle injury that ended her career in competitive running. Within three months of posting her first video, she surpassed over 100,000 YouTube subscribers. People loved her content and her channel grew day by day.

In October of the same year, she reached the one million subscribers mark. Her content includes vlogs, DIY videos tutorials, etc which are mostly funny. Some of her most popular videos involve her cutting her hair with craft scissors, making simple vlogs of her high school experience, recreating popular artworks, and transforming herself into popular characters by creating costumes by hand.

At the 2018 Shorty Awards, she reached the finals for the “Best YouTube Comedian” category and earned a nomination for the 2019 Streamy Awards “Breakout Creator” category.

Her most popular video is titled ‘i cut my hair with craft scissors’ which has over 11 million views. Some of her other popular videos include ‘I DIY’d Emma Chamberlain’s new clothing line’ and ‘I bleached my hair’.

Ceddia has brown hair and a pair of brown eyes. However, she has not revealed her height, weight, and other body measurements.

Joana Ceddia has an estimated net worth of around $500k as of 2020. Her main source of income is Youtube. According to different sources, she generates around $365k per year from Youtube and other sources.

After her meteoric rise to stardom in a short time, many people were convinced that she bought her subscribers. However, this theory quickly vanished as the view count matched up but that led to another theory.

According to the second accusation against her, she bought the views as well. Some other people suggest that she might have used a mysterious algorithm to gain millions of views and subscribers. She did admit that her channel’s growth has been ‘ridiculous’ but has not told much. She has even encouraged her haters and fans to come up with more theories. Most probably, these are false accusations made by people who are surprised or jealous of her popularity.

For some reason, she has deleted all her social media accounts. She had thousands of followers on Instagram. However, the account is deleted and not active as of now.

You may also like to read the Bio, Career, Net Worth, Relationships, and more about Alex Wassabi, Megan Margot, Mitchell Hladchuk, and more.