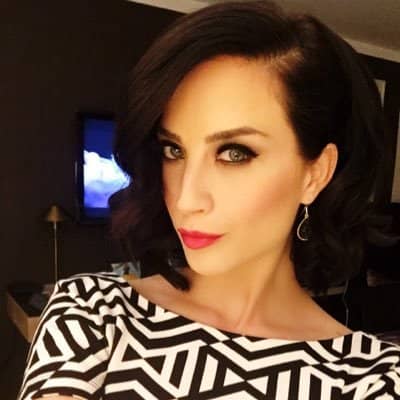 What is the relationship of Joanna Pacitti?

Talking about her love life, Joanna Pacitti is happily living a married life with Paul Linde. The couple tied the knot on 7 September 2013.

However, their relationship details are behind the curtain. Presently, they reside in Philadelphia. However, they do not have any children as of now.

Previously, she was in a relationship with Mark Ballas. Ballas is a well-recognized American dancer, choreographer, singer, songwriter, musician, and actor. The former couple dated in the year 2009.

Who is Joanna Pacitti?

Joanna Pacitti is a well-recognized American singer, former lead vocalist, songwriter, and actress. Pacitti is widely famed as the Lead vocalist of the band, City(Comma) State.

Moreover, she also auditioned for the eighth season of American Idol in Louisville, Kentucky.

Joanna Pacitti was born on 6 October 1984. At present, her age is 38 years old. Likewise, her birthplace is Philadelphia, Pennsylvania, USA.

Not much is known about her father and mother’s details, Joanna has been secretive about her family details. Moreover, she has a brother and a sister whose details are still not mentioned in the public till now.

Talking about her nationality, Pacitti holds an American identity whereas her ethnicity is Caucasian.

Regarding education, the singer studied voice with composer Russell Faith who helped the career of Andrea McArdle, Joey Lawrence, and others too.

Professionally, Joann began her career in the year 1996 at the early age of 12 years old.

She was selected to star in the 20th-anniversary revival of the musical Annie after entering a contest organized by the department store Macy’s. Pacitti featured in 106 performances on the national tour.

The producer decided to discontinue the singer before the show was to open on Broadway. There were some controversies with some unclosed reasons. The famous singer pursued her singing journey at the young age of 14.

She impressed Michelle Young with her demo tapes. Soon, Michele presented herself to many people in the music industry. Eventually, Joanna bagged a five-year deal with Ron Flair of A&M records.

Further, she had a short appearance on the show, What I Like About You where Pacitti performed with a singer named Amber and sang her song, Ultraviolet.

Her first single, Let It Slide was released in May 2006. Likewise, Joanna published her debut album, This Crazy Life on 15 August 2006.

Additionally, Pacitti also participated in season eight of American Idol and she auditioned in Louisville, Kentucky, in an episode that premiered on 21 January 2009.

She proceeded with the audition into the Hollywood round. Her career has created a debate about whether American Idol contestants should be strictly amateur performers.

Later, Joanna was withdrawn from the show announcing that she was ineligible to continue.

Former American Idol contestant has earned a decent amount of money from her multiple profession. She has been active in her profession from the year 1996 till the present.

It is reported that Joanna Pacitti has an estimated net worth of $1 million as of 2022.

However, a popular personality has not disclosed her exact salary, earnings, and assets details till now.

Joanna starred in the role of Annie to rave reviews and packed houses across the nation.

With her appearance for a few months, Pacitti was fired before the show hit Broadway by producers who reportedly treated her with the equal disregard that the fictional Miss Hannigan showed to Little Orphan Annie.

She was being filed a lawsuit seeking $10 million to $50 million in punitive damages. However, the cases ended up being settled out of court, and the terms were not disclosed.

Other than that, Pacitti has never been part of any controversial matter or rumors till now.

37 years star, Joanna Pacitti has gorgeous looks and an admirable personality. She stands at a height of 5 feet 2 inches.

Furthermore, Pacitti has blue eyes whereas her hair is brown.

Nevertheless, the celebrated singer has never mentioned other physical details in the public yet.

Regarding her social media presence, Joanna Pacitti is an active personality on social media. Joanna has more than 2.5k followers on her official Instagram account @joannapacitti.

She is also active on Twitter with around 3.2k followers.

Moreover, Pacitti is also available on Facebook at the moment.