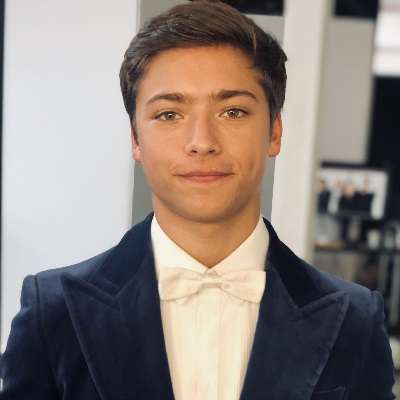 Joaquin Antonio Consuelos is possibly single. To date, he has not introduced anybody as his girlfriend or lover.

Who is Joaquin Antonio Consuelos?

Joaquin Antonio Consuelos was born on 24th February 2003 in the United States. He is of Italian ethnicity with Mexican roots. As of 2020, he is 17 years old. Also, his zodiac sign is Pisces.

He is the youngest child of his parents; Mark Consuelos and Kelly Ripa. His father, Mark is an American actor popular for portraying the role of Mateo Santos in ABC’s opera, All My Children. Also, her mother, Kelly Ripa is an actor, dance, and TV producer.

He has two siblings including an elder sister, Lola Grace Consuelos, and a brother, Michael Joseph (b. 2nd June 1997).

Talking about his academics, in the year 2017, he graduated from Middle School education. He graduated on the same day as her sister Lola’s birthdate. His mom shared a glimpse of his graduation day via her Instagram post. His entire family attended the graduation ceremony.

As of now, he is possibly attending High School. However, the name of his High School is not disclosed yet.

As of 2020, his net worth is not disclosed yet. Also, details on his salary are not available.

Talking about net worth, his dad, Mark Consuelos has a net worth of $41 million to be exact. He has accumulated a fortune through his career as an actor.

Also, his father is not the only one millionaire in the family, his mom, Kelly Ripa has an estimated net worth of $120 million with a $22 million salary per year.

He has brown eyes with brunette hair. He stands at a height of 5 feet and 7 inches and weighs around 63 kg.

The youngest child of the actor, Consuelos came into the limelight after one of his wrestling tournament videos got viral on the web. At the time, Joaquin’s headgear ripped off by his opponent when the actor came in the defense of his son.

After the intervention, both of the wrestlers continued the game showing true sportsmanship spirit.