Currently plays as the outfielder for the Atlanta Braves in Major League Baseball (MLB).

Joc Pederson is currently married to his wife Kelsey Williams. The two were in a serious relationship for a long time before getting married.

Joc and Kelsey tied the knot in January 2018 in a grand ceremony in Santa Barbara, California.

The two also have a daughter named Poppy Jett Pederson who was born on the 13th of October, 2018. The couple also features each other on social media and are living happily in California.

Joc hasn’t shared any information about his ex-girlfriends and previous relationships as of now. 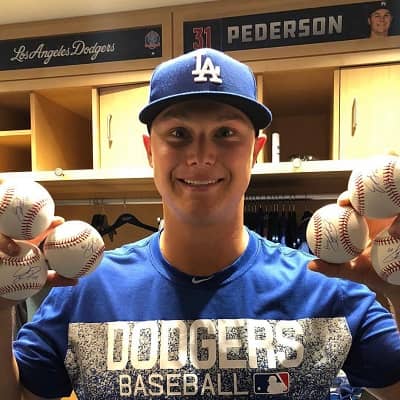 Who is Joc Pederson?

Joc Pederson is a well-known American professional baseball player. He currently plays as the outfielder for the Atlanta Braves in Major League Baseball (MLB).

Joc Russell Pederson was born on the 21st of April, 1992 in Palo Alto, California, USA. As of now, his age is 30. His nationality is American but his ethnicity is Jewish.

Joc was born to his father Stu Pederson and mother Shelly Pederson. His father was also a baseball player who played for 12 years in Minor League Baseball.

Stu even made it to the Major league and played eight games for Los Angeles Dodgers in 1985. Joc’s mother Shelly worked as an athletic trainer in college.

And thanks to both of them, Joc started playing baseball at a higher level than his peers from childhood. He also developed a passion for the sport which he definitely has even now.

Talking about his education, Joc graduated from Palo Alto High School in 2010. He played both baseball and football for his high school and was really good at both sports.

He has previously committed to play baseball at the University of Southern California but he was drafted by the Los Angeles Dodgers and decided to play in the MLB instead.

Pederson was selected by the Los Angeles Dodgers in the 11th round of the 2010 Major League Baseball draft. He received a 600k USD bonus and started playing with the Ogden Raptors in the pioneer league. He performed on the stage and many teams in Major League saw his potential.

And thanks to this he was even selected as a Rookie League All-Star. After this performance, he went on to play for Rancho Cucamonga Quakes of the California League in 2012.

In this season he rose in popularity and his performance made him the Dodgers’ Minor League Player of the year. And after 2 more years in the minor league with great performances, he moved up to the major league in 2014.

Peterson made it into the 40-man squad for Dodgers in September of 2014. His prior performances also made him a top-ten prospect and he proved it in his first full season in Major League.

He was even selected for the National League squad in the 2015 MLB All-Star Game. Joc continued to put up great stats for the Dodgers until 2020 which got him the nickname ‘King.

He also won the 2020 National League Championship with the Dodgers before leaving them. On the 5th of February 2021, Pederson signed a one-year contract with Chicago Cubs.

The main reason for the signing was that Joc wasn’t getting a lot of playtime with the Dodgers and hoped to increase it with the Cubs. And he did play with them for a couple of months. But in July, he was traded to Atlanta Braves and is currently their outfielder.

Pederson has amassed an impressive net worth of roughly 25 million USD. He currently earns around 4.5 million USD for an MLB season in 2021.

Joc stands at a height of 6 feet 1 inch tall and his weight is roughly 84 kilograms.

He is good-looking and has an attractive and athletic physique. His hair is dark brown and his eyes are blue in color.

Joc Pederson is active and popular on social media.

Get to know more about the lives of Nick Castellanos and Michael Kohn as well.