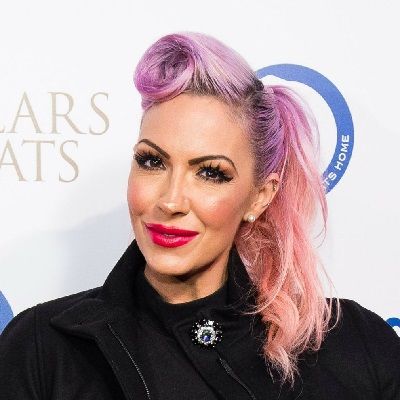 Eskimos are uncivilised because they don't have any shops

For so long I hid behind the blonde hair and the blue eyes. Now I feel like I've done it, I've done what I set out to achieve, now I can just go back to being me

What is the relationship of Jodie Marsh?

Before her relationship with Wayne, the TV star had been single since splitting from ex-husband James Placido whom she divorced in April 2017.

She also exchanged vows with Matt Peacock in 2007 but was separated in the same year.

Marsh was engaged to Brentwood DJ David Doyle, after dating for 11 days in 2006. Avoiding the traditional engagement ring, Marsh instead tattooed Doyle’s full name on her hand. But it couldn’t last longer ending up in late December and mid-January 2007.

In 2008, Marsh publicly began a relationship with a female hairdresser called Nina and photographs of the two on a number of dates published in magazines and newspapers of the time.

Who is Jodie Marsh?

Jodie Marsh is a well-known English model and a media personality. She is furthermore popular as a bodybuilder and columnist.

Jodie has appeared in many television shows including Celebrity Big Brother.

She maintains her fitness and keeps adding tattoos to her body. Jodie frequently makes headlines because of her relationship issues. Initially, she gained fame for adult modeling and established herself as a celebrity.

Jodie Marsh was born on 23 December 1978 in Brentwood, Essex, England. Her father’s name is John Marsh and her mother’s name is Kristina Marsh.

She has a brother named Jordan. She belongs of British nationality and is of English ethnicity.

Essex and educated at the independent Brentwood School. Other information regarding her educational background is unknown.

Jodie Marsh was working at String fellows when she appeared in a program about Essex Wives in 2002. This led to several modeling jobs.

She has later participated in many reality television shows, including Trust Me – I’m A Holiday Rep, Channel 4’s The Games, and E4’s Fool Around… with Jodie Marsh on two occasions.

And so she was able to win a celebrity version of The Weakest Link in the year 2006. Marsh played a cameo role while performing in the first episode of Channel 4’s Friday night comedy show “The Kevin Bishop Show.”

Then she competes in Celebrity Big Brother and respectively appeared on different spin-off shows including Big Brother’s Little Brother.

In 2008, Marsh appeared on Channel 4’s documentary It’s The Dog or Me. In Channel Five’s reality show The All-Star Talent Show, she was the contestant.

Likely on 29 September 2010, she was seen performing in the one-off documentary. Furthermore, she appeared on Channel 5’s Bullied: My Secret Past in the year 2012.

Working out with Channel 5, she broadcasted the first two shows titled Jodie Marsh: Bullied in 2013. Then she appeared in various magazines such as FHM, Loaded, Nuts, and Zoo.

Marsh has also featured on LA Muscle TV in an hour-long show called six-pack in 4 weeks.  Marsh appeared on Daybreak and The Late Show in October 2011.

In the year 2012, Marsh worked on two TV shows for the DMAX network. She wins the gold in the INBF Bodybuilding Championships in Los Angeles in June 2012.

She hasn’t received any awards. Though she wins the gold in the INBF Bodybuilding Championships in Los Angeles in June 2012.

Jodie wrote an autobiography called Keeping It Real, which reached the top 10 on the best-sellers list.

In 2004, Marsh told that she had had a sexual liaison with Chelsea F.C. midfielder Frank Lampard. But Lampard denied the claims and filed a complaint with the Press Complaints Commission.

The complaint was not upheld and Marsh clarified they had done everything but intercourse and four other men had been involved.

Jodie Marsh stands with a height of 5 feet 2 inches. Likely, she weighs 60 kg.

She has naturally blonde-colored hair but dyes it into a different color. Likely, she has light brown colored eyes.

What made Jodie Marsh famous?