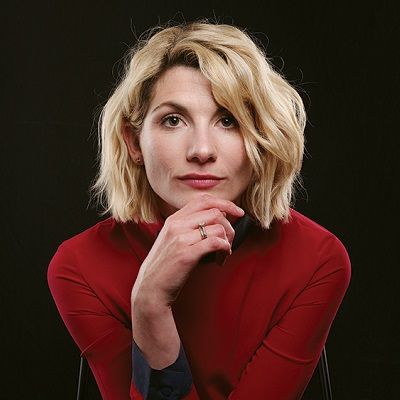 There's the chiselled superhero that we're used to seeing and we've all grown up with. But Doctor Who has never been that, which is wonderful. It's attainable in so many ways

I am a quiet person's nightmare. The only time I shut up is when I'm reading, because I'm a book geek

I'm not cerebral in any way. Education, for me, was a nightmare. You put someone talking in front of me, and I cannot engage with that. I think that's why I'm an actor

if I can physically be in it, I get it.

Jodie Whittaker is married. She has exchanged vows with Christian Contreras in Nov 2008.

This couple is blessed with one daughter in April 2015.

Who is Jodie Whittaker?

Jodie Auckland Whittaker or Jodie Whittaker is an English actress.

She was subsequently commended for her roles in Attack the Block (2011), the Black Mirror episode “The Entire History of You” (2011), and in Broadchurch as a grieving mom Beth Latimer.

Born 17 June 1982, Whittaker spent her childhood in Skelmanthorpe, West Yorkshire. Her father Adrian Whittaker was the former president of the Huddersfield Cricket League and her mom Yvonne was a stay-at-home mom.

Whittaker has not revealed her personal life very much so her sibling’s information is unknown.

Whittaker holds British citizenship and is of English Ethnicity.

Before training at the Guildhall School of Music and Drama, and graduating with the highest prize, the Acting Gold Medal, in 2005. She attended Scissett Middle School and Shelley High School.

In 2005, Jodie Whittaker did her professional debut at Shakespeare’s Globe in The Storm. Since then, she has worked in movies, television, radio, and theater. In 2007, she stood for an unwell Carey Mulligan in the production of The Seagull by the Royal Court at brief notice and participated in a fundraising play at the Almeida Theater.

She co-starred in the movie Venus as Jessie / Venus. Her radio credits include a 2008 adaptation of Stephen Poliakoff’s Blinded by the Sun and Judith French’s initial drama, Lydia Bennett, in Unseen Austen. In 2009, she worked on the film Expanding Purple World by Ollie Kepler, the BBC2 drama Royal Wedding, and the nominated short movie Wish 143.

Whittaker was announced as the Thirteenth Doctor on 16 July 2017 in the science fiction television series Doctor Who. This actress is the first female to perform the title role. She had earlier worked on Broadchurch with incoming Doctor Who showrunner Chris Chibnall.

She confessed that after being cast, she had to “say a lot of lies” to maintain the data confidentiality and used the codeword “Clooney”.

Whittaker has been nominated for many awards but she has won only one award and that is the RTS Television Award for Best Actress for the TV series The Afternoon Play (2006).

Jodie Whittaker: Salary and Net Worth

Jodi has an estimated net worth of $6 million dollars. She racks in that huge amount from her acting career.

Jodie was a name that was never included in controversies and rumors but this time after her casting as the 13th Doctor in the series Doctor Who, Whittaker’s casting reaction was mostly positive, although a significant minority was unhappy. Some said a female doctor would be a nice role model for young girls, while others thought that the doctor was ever intended to be male.

Jodie Whittaker stands around 5 feet 4 inches tall. She weighs around 50 kg. Likewise, her body measurements are 32-24-32 inches. Her eyes are in green color and her hair is blonde.