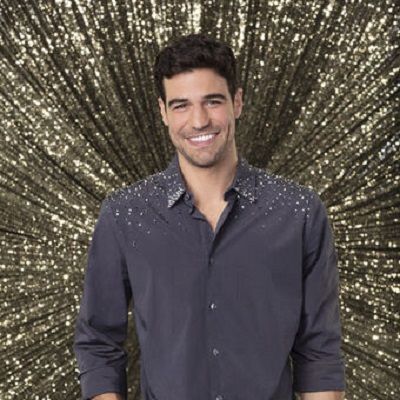 Dating in the real world is so much different than dating on television. We clicked on TV, but once we started really dating out here, it just always worked. It was always very natural. And I enjoy every day!

But he used to date his fellow contestant from Bachelor in Paradise S5, Kendall Long. She is a creative director.

Their relation was started in the show in 2018 and was ended there only. But after the show, this couple again started to see each other.

However, they are now broke up. The separation news was announced on Jan 29, 2020. They both wrote that they mutually parted away.

Who is Joe Amabile?

Joe Amabile is an American TV personality and businessman. He was seen in reality shows like Dancing with the Stars, The Bachelorette, and Bachelor in Paradise.

He hasn’t revealed details about his parents. He has a brother who is a cop. His grandfather was Joseph ‘Joe Shine’ Amabile who was a figure in organized crime. He died in 1976.

His parents currently live in Melrose Park. He is called ‘Grocery store Joe’ as he is the owner of a small grocery store in the neighborhood of Hegewisch.

As per ethnicity, he is of Italian and Norwegian descent. Joe attended Holy Cross High School. He was an average student.

Professionally, Joe Amabile is a grocery store owner and manager. He is also a trader in the Chicago stock exchange. But he is mainly known for his participation in three reality shows.

Joe participated in the 27th season of dance reality TV show Dancing with the Stars. His dancing partner in the show was Jenna Johnson. The show was aired from Sep 24, 2018, till Nov 19, 2018.

During the shoe, he was saved until seven weeks but got eliminated in the eighth week. Joe has performed in songs like Check it Out, The Gambler, Zero, This Year’s Love, etc.

The winner of Dancing with the stars S27 were Bobby Bones and Sharna Burgess.

Unfortunately, Joe got evicted in the first week. This season’s bachelorette was Becca Kufrin and was won by Garrett Yrigoyen who is a medical sales representative.

He was paired with Kendall Long, a creative director from Los Angeles, California. But they both got eliminated in week 5.

Joe till now has not been in any scandals. He has maintained a good image among the public.

He has an estimated net worth of $500 thousand.

The winning amount of the show, Bachelor in Paradise was $250K US.

Talking about Joe Amabile’s body features, he has light brown eyes and dark brown hair. His height is 5 feet and 7 inches and weight is average.

Joe is also active on Twitter and is followed by over 67.8k followers. This account was created in June 2018.

But this TV personality is not seen on Facebook.