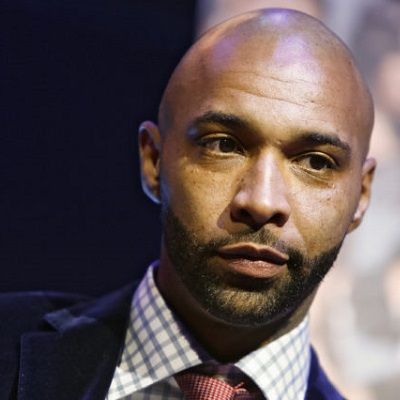 Joe Budden is currently dating a model named Shadée Monique. They started to see each other from Aug 2019.

He was engaged to Cyn Santana. He proposed to her in 2018 December in a live podcast show.

They together have a son named Lexington Budden. Currently, Cyn and Joe are not in a relationship. They split up after four months of their engagement in 2019.

Joe has a son named Trey Budden from his previously unknown relationship.

Who is Joe Budden?

He was born on August 31, 1980, in  Harlem, New York, United States. Budden was raised by his mother Fay Southerland with his older brother in Jersey City, New Jersey.

Budden’s father has been absent his whole life so he shares a deep bond with his mother.

He holds American Citizenship and is of Afro-American ethnicity

Budden attended Laurinburg Institute for troubled youths in North Carolina and later attended Lincoln High School in New Jersey. Due to his drug addiction problem, Budden was not able to earn a degree.

Joe Budden started to take music more seriously and in 2001 he released his first mixtape. Budden and his local producer friend Dub-B started creating demos, one of which landed in the hands of Hot 97 radio host and Desert Storm Records label head DJ Clue, who invited Budden to rap on some of his mixtapes, working with Fabolous and his brother Paul Cain early on.

His freestyle over the instrumental to Grindin’ by Clipse and his original song Focus attracted attention and led to further mixtapes appearances by the likes of DJ Kayslay and Cutmaster C. Following two years on the mixtape circuit, Budden secured a deal with Def Jam Recordings in 2003, after which he began working on his major-label debut.

Budden made a number of guest appearances before the release of his debut album after signing his major deal, working early on his contract with Kelly Rowland and the 3rd Store. On June 10, 2003, Budden released his eponymous debut album, Joe Budden, by Def Jam Recordings. It debuted at number 8 on the US Billboard 200, in its first week selling 95,000 units and in the United States selling 420,000 + copies. It also entered the UK Albums Chart at number 55.

Following the respectable success of his first release, Budden wanted his second release, titled The Growth, to take a less commercial direction. This decision was met with higher-up Def Jam disagreement that wanted The Growth to follow his first release’s commercial style. The album remains unreleased, and ongoing disagreements between Budden and Def Jam eventually led both sides to part ways.

While on Def Jam, he managed to release the first and second installments of his Mood Muzik mixtape series, and the series received critical acclaim.

In May 2016, together with Rory Farrell and Marisa Mendez, Budden started to release a weekly podcast, then known as “I’ll Name This Podcast Later.” Mendez left and was replaced for episode 77 by Jamil “Mal” Clay, after which it was most commonly referred to as “The Joe Budden Podcast.”

During the summer of 2018, The Joe Budden Podcast started touring with live performances throughout the U.S. In August 2018, Budden signed an agreement to bring his podcast to Spotify and expand the show with new episodes every Wednesday and Saturday to a bi-weekly schedule.

Budden has an estimated net worth of $6 Million but his salary is under review. His primary source of income is from his music and podcasts he does.

IN 2014 Budden was arrested for Domestic abuse and robbery charges filed by his girlfriend of the time.

According to police, at around 4.30 am Monday, this Pump It Up singer forced the 25-year-old woman into his car near the corner of Nagle Avenue and Dyckman Street in Queens, smashing her head into the dashboard.

Budden supposedly then drove the woman to his New Jersey home, where he punched her and kicked her. The girl also filed for a robbery of her smartphone which according to her Budden had done it.

Joe Budden stands tall at around 6 feet and weighs around 75 kg. He has dark brown eyes with natural black hair. But he likes to be bald.

Know about Rory Lee Feek’s wife, Joey Feek’s sad death after her fight with cancer in 2016 at just the age of 40. Now their daughter Indiana accompanies Rory.