Posted by MarriedBiography Posted on November 18, 2020 | In controversy , Married , Wellness
Share this

Dillon Passage ‘Tiger King’ is arrested for drunk driving. As per the report, the Netflix star was arrested in Texas during DWI. The passage is all over the internet after the news broke out. Here are the full details of the arrest and cops’ statement.

Moving on, the cops explained he tried to pull out the ‘celeb card’ at the time of the arrest. He made them know about his social status and his famous Netflix star, husband Joe Exotic.

The report states Passage mentioned he was there waiting for his sister because his car turned off. Dillon allegedly had slurred speech and bloodshot eyes.

The cops also mentioned Dillon admitted to having 3 Modelo beers and he was a little intoxicated. After the sobriety test, cops arrested him for DWI.

Cops stopped him in Travis Country in Texas after 3 AM. Dillon was updating his Instagram story from the event from the night before his arrest. His husband Joe explained he tried his hardest to get Dillon to quit drinking.

Married life of Joe and Dillon

The Netflix star Joe tied the knot with Dillon on December 11, 2017. They had their wedding event just two months after Joe’s previous husband, Travis Maldonado accidentally shot himself. Exotic is currently serving jail after his 22-year prison sentence for putting a hit out on Carole Baskin.

The Netflix star strongly denies the allegations against him. Moreover, he also asked President Trump to either a commutation of his sentence or an outright pardon.

Court declared him guilty in April 2019 for a failed murder-for-hire plot against his big cat rival Carole Baskin. Currently, he is at the Federal Medical Center in Fort Worth, Texas.

When Passage met his now-husband he was fighting with depression and drug issues. He has always been open about his struggles and how Exotic helped him during his dark times. Dillon has also credited his husband for helping him get out of his dark times. He once stated:

“Joe brought me out of my depression and made me feel like I was wanted. He was like the shining light that kept me out of that.”

You may also read- Producer David Guillod arrested for Rape! Know about his previous offense!

Joe Exotic is an American former owner of Oklahoma Wildlife park and a big cat dealer. Currently, he is serving a 22-year prison sentence after being found guilty of attempting to hire two people to kill Caroline Baskin. In addition, too many animal violations including killing five beautiful tigers. He became well-known after ‘Tiger King’, a Netflix series was released about his crime journey. See more bio…

You may also read- Zachery Ty Bryan arrested after a physical dispute! 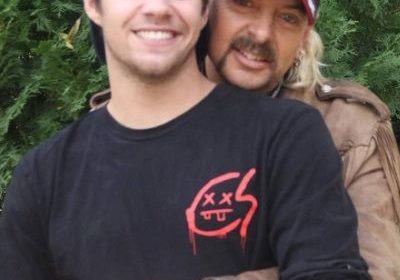