Joe Jonas is a singer and one of the band members of the band, Jonas Brothers. Joe is married to Game of Thrones famed actress, Sophie Turner since 2019. 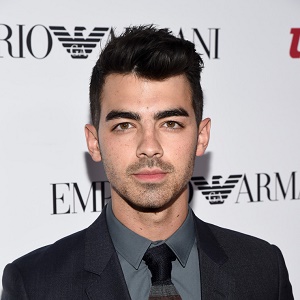 Meeting people who want to start a charity, help out their families, or raise money for a good cause has been really fun

Being on stage makes me come to life. When all eyes are on you, they're watching every move you make.

Joe Jonas is married to Sophie Turner on May 1, 2019. Sophie is a GOT famed English actress Sophie Turner. Joe and Sophie dated from November 2016. His wife Sophie is expecting their first baby.

Then in late July, this couple welcomed their daughter and named her Willa Jonas.

Demi Lovato (2010, an American singer) announced their togetherness via Twitter in May 2010 which did not last long from Jonas’s side and same happened with Dulce Maria who was together with Joe for just a month.

Even Gigi Hadid (once in a relationship with Joe’s brother) dated Joe Jonas in 2015 and were caught together many times by the fans. Amanda Michalka, Ashley Greene, Nina Agdal, and Blanda Eggenschwiler are other celebrities who fell in love with Joe.

Who is Joe Jonas?

Joe Jonas is an American singer who exhibits a perfect sample of a beautiful voice and earned enough name and fame as a member of the boy band ‘Jonas Brothers’ in which his own siblings Nick Jonas and Kevin Jonas were the other two members.

Getting involved in Disney Channel and releasing his debut film Original Movie Camp Rock (2008) made them more highlighted in the frame of the film industry as well.

Joe was born on 15 August 1989, in  Casa Grande, Arizona, United States. His nationality is American and his ethnicity is mixed (Italian, German, Cherokee, English, Irish, Scottish, and French-Canadian).

Joe, born in a Christian family, is a son of Denise, and Paul Kevin Jonas having his entire family involved in singing and for a reason gained heights of popularity & stardom. He was brought up in Wyckoff, New Jersey, United States of America.

Father (songwriter, musician, and former minister at an Assemblies of God church, mother (former sign language teacher and singer), brother Nick, Kevin, and Frankie Jonas (singer of the rock boy band ‘Jonas Brothers’) created a perfect environment for Joe to be a successful singer in his coming future.

At the age of 12, he auditioned for Baz Luhrmann’s production of La Bohème on Broadway and got the first opportunity to initiate his career.

Joe is a graduate of Atlanta, Georgia. He graduated in the year 2008.

After getting a golden opportunity to cast for La Bohème and forming their own boy band Jonas Brothers, Joe and his brothers got an immense success of selling over 2 million copies of their second album ‘Eponymous’.

This formation of three brothers soon expanded their hold in Radio Disney and Disney channels and starred on Miley Cyrus’s show ‘Hannah Montana’ resulting in the highest rating of the program ever.

Joe Jonas along with his brother was climbing the wall of stardom rapidly which includes another album’s single ‘S.O.S’ and also achieved the record of having 3 albums at Billboard Top 10 at once.

After the cancellation of the fall tour, Jonas Brothers officially announced the split-up of their band. The split made Joe Jonas open another group with musicians, guitarists, drummer, and bassist and named it ‘DNCE’ and released their first single ‘Cake by the Ocean’ in 2015.

Rumors have always been around Joe Jonas from the very beginning of Jonas Brother’s popularity. The breakup of Joe with Taylor was once a huge headline for celebrity-based news portals.

Similarly, Joe is a drug addict, releasing Joe’s sex tape was one of the rumors that Joe clears away through social media and other media interviews.

Joe has a height of 5 feet 8 inches. His body weighs 64kg. He has black hair and dark brown eyes.