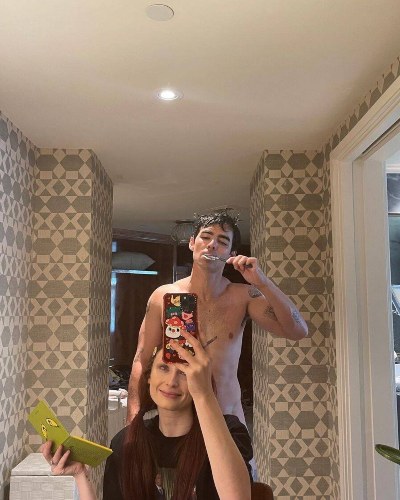 Nobody celebrates a better birthday than the Jonas brothers! Joe Jonas goes nude for his 32nd birthday. Sophie Turner clicked a naked photo of her husband Joe while celebrating his birthday on 15th August 2021.

In the steamy picture, Jonas is standing behind Turner naked while brushing his teeth. Sophie seems to be in the middle of doing her makeup as she sat in front of a vanity.

The lovebirds appear to have celebrated Joe’s birthday at the Beverly Hills Hotel’s Polo Lounge. Likewise, they also enjoyed some golf-themed decor, a round of James Bond Nintendo, a cappuccino cake, and some giant balloon which was numbered 32.

Sharing the pictures of the birthday celebration on Instagram, Joe wrote,

“Thank you everyone for the b-day love yesterday #32,”

Joe is an American singer who exhibits a perfect sample of a beautiful voice and earned enough name and fame as a member of the boy band ‘Jonas Brothers’ in which his own siblings Nick and Kevin Jonas were the other two members.

Getting involved in Disney Channel and releasing his debut film Original Movie Camp Rock (2008) made them more highlighted in the frame of the film industry as well. Read more bio…

Mae Whitman revealed her sexuality as she came out as pansexual!
Tags : Jonas Brothers Singer