Joe Judge is an American Football coach. He is living a blissful conjugal life to Amber Meesy.

Joe Judge is living a blissful conjugal life to Amber Meesy. His companion was an All-SEC soccer player at Mississippi Stated.

The couple met for the first time while attending Mississippi State. The duo tied the wedding knot in the year 2005. 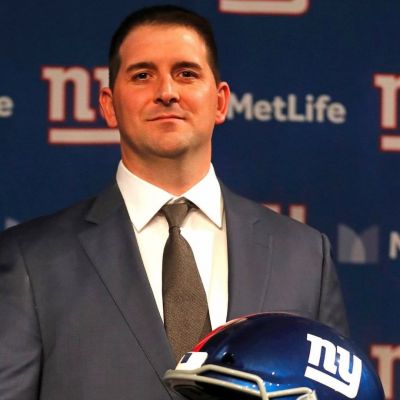 Who is Joe Judge?

Joe Judge is an American Football coach. He is currently served as the head coach of the New York Giants of the National Football League (NFL).

From 2012-2019, he served as an assistant coach for the New England Patriots.

Joe was born on the 31st of December 1981, as Joseph F. Judge. He hails from Philadelphia, Pennsylvania, and spent his childhood in Doylestown.

He is the middle son of Joseph Judge (father) and Denise Judge (mother). His father is also a professional football player and played for the Hamilton Tigercats of the Canadian Football League.

Talking about his academic background, he attended Landsdale Catholic High School in Lansdale, Pennsylvania. He then joined Mississippi State University where he played for the college football team from 2000 to 2004.

He holds an American nationality whereas his ethnicity is Caucasian.

Joe has managed a clean profile to date. He hasn’t been part of such controversial acts and rumors that create a huge buzz in the media.

In January 2020, Joe joined as the head coach of The New York Giants, on a five-year contract deal. As per other sources, he received $5 million annually.

Talking about his net worth, he has accumulated almost $3 million as of 2022. While he works as an assistant coach at the New England Patriots, it is reported his annual salary is between $150,000 to $200,000.

Joe has an athletic body physique. Talking about his physical appearance, he has a brown pair of eyes, and his hair color is black.