Joe Keery is currently in a love affair with Maika Monroe. Maika is an actress and professional kiteboarder.

The couple first made their relationship official when they stepped out on the red carpet together at the Stranger Things season two premiere.

They started dating each other in the year 2017 and currently, it’s been four years since they have been in love life. They met for the first time on the set of the film After Everything. The lovebird often has been seen in many events and in award shows together. 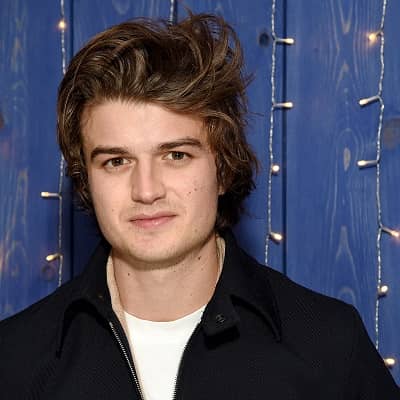 Who is Joe Keery?

Joe Keery is a renowned American actor and musician. He rose to fame after appearing in the role of Steve Harrington in the American science-fiction horror streaming television series, ‘Stranger Things.’

Joe’s birth name is Joseph David Keery. He was born in Newburyport, Massachusetts, the U.S. on the 24th of April in 1992. He is of American nationality and is of Caucasian ethnicity.

The name is his parents are Davis Keery and Nina Keery. His father is an architect by profession whereas his mother is a professor of English.

Joe is the second child of his parents. He has four more sisters named Carolina, Lizzy, Kate, and Emma.

Moving towards his academics, he attended Montessori elementary in the River Valley Charter School. He studied high school at Newburyport High School.

Further, he graduated from the theatre school at DePaul University and received a Bachelor of Fine Arts in Acting in 2014.

After graduation, he started his acting career and made an appearance in the 2015 drama film, Henry Gamble’s Birthday Party where he portrayed the role of Gabe. In the same year, he starred in the comedy television series, Sirens in the episode of Screw the One Percent.

In the following year, he appeared in television series like Chicago Fire in the role of Emmett, Empire in the role of Tony Trichter III. He made his career breakout when he was featured in the recurring role of Steve Harrington in Stranger Things.

However, he auditioned for the role of Jonathan but later sent in a tape for his character, Steve. Currently, he is shooting for the action comedy film, Free Guy where he portrayed the role of Keys which is his upcoming movie planning to release on August 13, 2021.

Lately, he released his music in 2020 under the name ‘Cool Cool Cool.’

– Awarded for the Outstanding Performance by an Ensemble in a Drama Series, Stranger Things in 2017.

– Nominated for Outstanding Performance by an Ensemble in a Drama Series, Stranger Things in 2018.

To date, Joe has not been part of rumors and disputes that create headlines in the media. However, his Twitter had been hacked on April 19, 2020, and the hacker tweets very strange and character messages on his Twitter account.

The hacker posted controversial tweets that Keery is COVID-19 positive, he was molested on the Stranger Things set, he is having kidnaped Joe, and so on.

Joe has an estimated net worth of around $2 million as of 2021. His main source of income is his dual profession as an actor and musician.

He received around $150 thousand per episode through season four of Stranger Things. His other assets and yearly income are still under review.

The actor has a well-maintained body physics. He stands at the height of 5 feet 11 inches and his weight is around 73 kg. Likely, he has a hazel eye color with dark brown hair.

Similarly, he has amassed nearly 7.1k followers on his Facebook page.