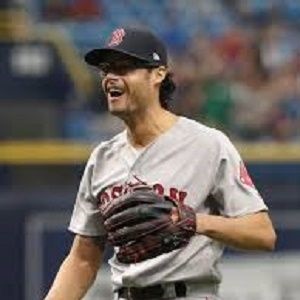 What is the relationship of Joe Kelly?

Joe Kelly is married to Ashley Parks and both of them are blessed with a child (Knox).

Furthermore, their family of Joe is living happily until now. They are spending more time with their children

Who is Joe Kelly?

Joe Kelly is an American professional baseball pitcher. He is a free agent who has played in Major League Baseball (MLB) for the St. Louis Cardinals and Boston Red Sox. He has served as both a reliever and a starter.

Joe is popular for his comical repertoire, such as skillfully dancing in the outfield during practice, and disguising himself while interviewing the unwitting rapper Nelly.

What are the birth facts of Joe Kelly?

He was born on June 9, 1988, as Joseph William Kelly Jr. in the United States. His parents are Joe Kelly Sr. and Andrea Valencia. His siblings are unknown.

After that, he attended the University of California, Riverside, and played college baseball for the Highlanders team.

Joe Kelly’s successful career started at UCR included a 4.65 ERA and an 8–11 record in 42 career games. Furthermore, in the third round of the 2009 MLB draft, The St. Louis Cardinals drafted Kelly and signed him on June 15 for $341,000.As well as, the Cardinals mainly used Kelly as a starting pitcher with the Class A Quad Cities River Bandits to get him more innings and develop his secondary pitches in 2010 and succeeded in the role and remained a starter.

Moreover, Kelly pitched for the Class A-Advanced Palm Beach Cardinals of the Florida State League and then the Double-A Springfield Cardinals of the Texas League in 2011. He appeared in 23 games and pitched 132 innings, recording 113 strikeouts and 59 walks with an 11–6 record and 3.68 ERA.

Kelly made a guarantee to the Boston media that he would win the AL Cy Young Award the following season in January 2015. He made three appearances in the 2016 American League Division Series.

Kelly continued his role as a member of the Red Sox bullpen for the 2017 season. In-Game 4 of the 2018 World Series, on October 27 he was the winning pitcher. He now plays for Los Angeles Dodgers.

He posted a 5.65 earned run average (ERA) with a 1–1 win-loss record in 2009 and he has set a Highlanders record with 24 career saves and was named an All-American.

In 2007, he was named Big West Conference Pitcher of the Year as a freshman.

He has not been a part of controversy and rumor as he knows how to maintain his personal life.

Joe Kelly: Salary and Net Worth

This player earns $3 million estimated from his work. As of 2022, his estimated net worth is about $12 million.

How tall is Joe Kelly?

Joe Kelly is a good-looking man with black hair and dark brown eyes. Besides that, he is 6 feet 1 inch tall with a body mass of 73 kg.