Joe Namath is a well-recognized former American football quarterback. He is presently single.

Talking about his love life, Joe Namath is presently single and is not dating anyone at the moment.

Previously, he was married to his long-term partner, Deborah Mays. Mays is a well-named American actress who gained high fame for her act in The Greatest American Hero. While taking a vocal class in 1983, Namath met Mays. He was at the age of 39 and she was 22.

The former couple tied the knot on 7 November 1984. Additionally, they had two children named Jessica Grace born in 1986, and Olivia Rose born in 1991. Sadly, they ended their long-term relationship on 28 June 1999.

The footballer struggled with alcoholism throughout much of his life. It became intense after his marriage to Mays, as he continued to drink heavily. Mays even threatened him that she might be divorced Namath and later he managed to get his addiction under control. 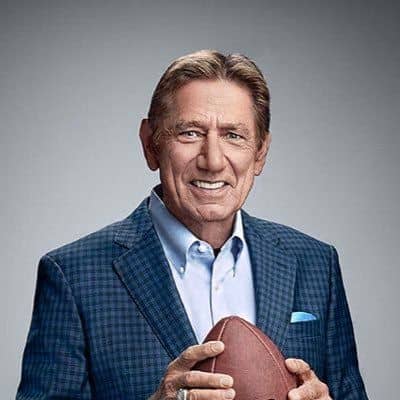 Who is Joe Namath?

Moreover, his overall career was an impressive one, but the highlight was when he once, confidently assured the Jets’ victory over the NFL team, Baltimore Colts.

Joe Namath was born on 31 May 1943. At present, his age is 78 years old. Likewise, his birthplace is Beaver Falls, Pennsylvania, the USA.

Joe is the son of his father, Janos “John” Andrew Namath whereas his mother is Rose Namath. Moreover, he has four siblings

Talking about his nationality, Namath holds an American identity whereas his ethnicity is Hungarian.

The athlete studied at Beaver Falls High School and was a standout quarterback in football. He earned many offers from several Major League Baseball teams which consist of the Yankees, Indians, Reds, Pirates, and Phillies.

After featuring in several games for his high school and winning the different tournaments, Joe started his professional career making his debut in the senior team in 1964.

He was drafted in the upstart American Football League and the National Football League on 28 November 1964. As NFL picked him, the star decided to sign a contract with the Jets.

Additionally, Namath became the first quarterback to pass 4000 yards in one season. In the very next year, he led the Jets to a 27-23 win over the defending AFL champions, Oakland Riders. Moreover, he again led the Jets’ win over the Baltimore Colts with a win of 16-7.

Later in 1974, the star led the Jets to a 26-20 victory over New York Giants. He was then offered a chance to play with the Chicago Winds from the World Football League. However, the athlete decided to play with his current team.

Other than his sports career, Namath has also acted in some movies and television shows. He featured as a guest star on shows like Married … With Children, The Flip Wilson Show, Rowan and Martin’s Laugh-In, and The John Larroquette Show.

In 1969, the star hosted his very own show, The Joe Namath Show, with guest-host, Dick Schaap. He also opened his very own Upper East Side bar, Bachelors III.

It is reported that Joe Namath has an estimated net worth of $25 million. He was involved in many commercials such as Ovaltine, Noxema Shaving Cream, popcorn machines, and pantyhose.

He also became the highest-paid celebrity endorser up to that point when he was earning$1 million per year from different brand deals in 1975. At that time, Joe was earning$450,000 per year in salary.

The star also purchased a mansion on the Upper West Side of New York City for about $1 million in 2016. In 2019, the mansion was put into sale with a listed price of $1.195 million.

He struggled a lot with his drinking habits. Namath had a serious issue with his former partner after he was heavily involved in drinking activity.

Later in 2003, Joe drank heavily before featuring with ESPN. The day was supposed to be about honoring the Jets’ All-Tie team. Sadly, headlines were all about Joe’s inebriation. He managed to answer one question from Suzy Kolber correctly, but then told the reporter that he wanted to kiss her.

Namath later accepted that he embarrassed himself and ultimately decided to get treatment for his alcoholism.

78 years old star, Joe has handsome looks and an admirable personality. She stands at a height of 6 feet 2 inches. Also, he has a balanced body weight of 91 kg.

Furthermore, Namath has hazel eyes whereas his hair is blonde.

Regarding his social media presence, Joe Namath is an active personality on social media. Joe has more than 34.8k followers on his official Instagram account @broadwayjoenamath.

He is also active on Twitter with around 98.3k followers.

Moreover, Namath is also available on Facebook with nearly 239k fans and supporters.