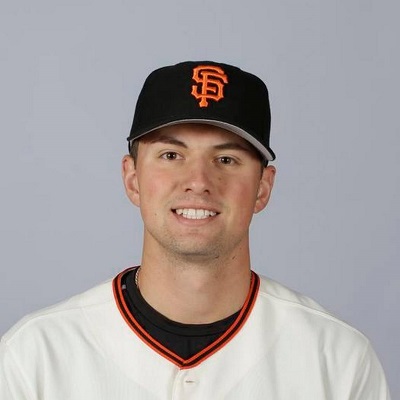 Joe Panik is a married person. He has been married to his longtime girlfriend Brittany since December 3, 2016. They knew each other when they were children. The couple has not welcomed any children yet. They are living happily without any sign of divorce.

Who is Joe Panik?

Joe Panik is an American professional baseball player who is the second baseman for the San Francisco Giants of Major League Baseball (MLB).

He was born on October 30, 1990, in Yonkers, New York, USA. His birth name is Joseph Matthew Panik. He was born to parents Paul Panik Sr. and Natalie Panik. He has an older brother Paul Panik Jr., a former Division 1 catcher at Canisius College.

He joined John Jay High School and then enrolled at St. John’s University where he played for St. John’s Red Storm baseball team.

He was ranked tenth among college baseball players with a .509 on-base percentage (OBP) during his junior season in his college.

Later, he was drafted by Giants in the first round, with the 29th overall selection, of the 2011 Major League Baseball (MBL) draft. He made his debut game with the Salem-Keizer Volcanoes and was rated the tenth best second base in prior to 2012 season.

Similarly, Joe Panik has played the 2012 seasons with the San Jose Giants and in 2013 he was promoted to the Richmond Flying Squirrels. He played with the Fresno Grizzlies by the next year.

Later, he started playing in the MBL for the San Francisco Giants on June 21, 2014. With the team, he has played baseball against Los Angeles Dodgers,  Los Angeles Angels of Anaheim, Washington Nationals, Kansas City Royals, Colorado Rockies.

Till date, he has been placed in the disabled list twice- once in August 2015 and other time in July 2018.

He was awarded a Gold Glove and 2015 All-Star in 2016. In addition, he was named as Most Valuable Player of the Northwest League while playing with the Salem-Keizer Volcanoes.

He signed a one-year-old contract with San Francisco Giants, his salary is $3.85  million in 2018. However, his net worth is under review.

Joe Panik has tendered a one year contract to remain with the San Francisco Giants and was immediately subject to trade rumors, which is pretty rude. In addition to potentially being shipped off, there was a lot of speculation that Joe Panik will be forced into a platoon role entering the 2019 season.

He has a height of 6 ft. 1 and weighs 91 kg. Joe Panik has dark brown eyes and dark brown hair. But, his shoe size, dress size, etc. are not available.