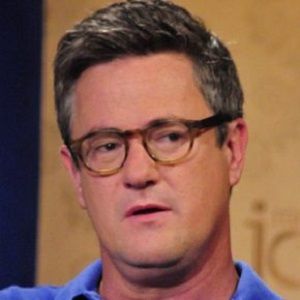 This is all about a media war that continues to rage between the old and new media. Unfortunately for our soldiers, these brave Americans are caught in the crossfire

When I was in Congress, I worked with Joe Kennedy to rename the Justice Department for Bobby, and when I retired, Teddy Kennedy sent me this Roy Lichtenstein print of his brother, inscribed: 'Bobby would have been proud of you'

Do not miss your children's childhood. Do not be away 200 nights a year as I was. Do not put strains on your marriage or family.

What is the relationship of Joe Scarborough?

Joe Scarborough has been married and divorced twice in his life. His first wife was Melanie Hinton.

They got married in July 1986. The couple together had two sons. After 13 years of their marriage, the couple divorced in the year 1999.

After that, Scarborough married his second wife, Susan Waren, a former aide to Florida Governor Jeb Bush and a former congressional committee staffer in October 2001. They together had a son and a daughter.

After 12 years of their marriage, Joe filed for divorce in January 2013. Since then, he has not been in any relationship till now. According to the records, he is currently married to Mika Brzezinski.

Who is Joe Scarborough?

Joe Scarborough is American cable news and talks radio host. He is currently the co-host of Morning Joe on MSNBC.

Jpe previously hosted Scarborough Country on the same channel. He was previously a lawyer and a politician and served in the United States House of Representatives from 1995 to 2001 as a Republican from the 1st district of Florida.

What are the birth facts of Joe Scarborough?

Joe was born on 9 April 1963, in Atlanta, Georgia, USA. His nationality is American and he is of North American ethnicity.

His birth name is Charles Joseph Scarborough. He is the son of Mary Clark and George Francis Scarborough, a businessman. He has two siblings.

Joe began his career as a lawyer in 1993. His political profile was also raised that year. He began his political career winning the Republican Party primary for Florida’s 1st congressional district. In 1998, he was named Chairman of the Civil Service Committee.

While still serving in Congress, Scarborough founded the free weekly Pensacola-area newspaper The Florida Sun in 1999. The paper later merged in 2001 and is now known as the “Independent News“. In April 2003, he embarked upon a television career with the launch of Scarborough Country on MSNBC, until he began hosting Morning Joe full-time.

After that, he hosted a syndicated talk radio show called the Joe Scarborough Show on ABC Radio Network. He also hosted Scarborough Country, a primetime news show. He is currently the co-host of Morning Joe on MSNBC.

Joe released his first book, “Rome hasn’t Burnt in a Day: The Real Deal on How Politicians, Bureaucrats, and Other Washington Barbarians are Bankrupting America” on October 4, 2005. His second book, The Last Best Hope was released on June 9, 2009.

How tall is Joe Scarborough?

Joe Scarborough has a height of 6 feet 3 inches. His height is not known. Furthermore, his hair color is brown. Also, his eyes are brown too.

Furthermore, also find out more about the early life, career, net worth, relationships, and controversies of Host, lawyers, and politicians like Jerry Springer, Keith Ellison, and Laura Ingraham.