Joe Smith is an American former professional basketball player. He played at power forward position for National Basketball Association teams. He is married and has three kids.

Joe Smith was married to longtime girlfriend Yolanda Smith. The couple has raised three children. Later he was caught cheating on her when she found him hooking with another girl named Deanna Marie.

She then divorced him in 2011. Now he is married to another woman. Her name is Kisha Chavis. They engaged in the year 2016 and exchanged vows in 2018. 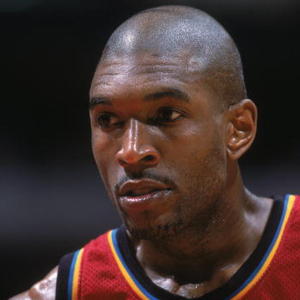 Who is Joe Smith?

Joe Smith is a former American Professional basketball player. During his 16 years long spell he played at the power forward position for 12 different teams in the NBA.

Joe Smith was born on 26 July 1975, in Norfolk, Virginia, US. He is an American nationality and his ethnicity is All-American. Further, there is no information regarding his father, mother, and siblings.

He was educated through Maury Fontaine High School and later attended the University of Maryland.

Joe Smith started playing Basketball at the college level and was a college player of the year at Maryland in 1995. Later that year he was drafted into NBA by Golden State Warriors as a No.1 pick of the season.

He is one of the most transferred players in the NBA. Smith was transferred to Philadelphia 76ers and then to Minnesota Timberwolves until 2003 before playing a season with  Detroit Piston.

He has shown off his basketball forward skills in various teams including Milwaukee Bucks, the Denver Nuggets, the 76ers again, the Chicago Bulls, the Oklahoma City Thunder, the Cleveland Cavaliers, the Atlanta Hawks, and the New Jersey Nets, and the Los Angeles Lakers. He retired from his NBA career in 2011 with career averages of 10.9 points and 6.4 rebounds a game.

During his glorious career, he was named to the All-Rookie First Team in 1995–96 and honored with various awards like Naismith Award Adolph Rupp Award, and many others. Besides basketball, he has sung in a solo Rap album, Joe Beast. It includes the title track  “Murda Kapital” and “I Does This”

This player has earned more than $60 million in his playing career. He is now in debt and has spent most of his money on cars, a costly divorce, and bad investments. So he has now an estimated net worth of -$100,000.

There are no rumors regarding his life. He is also away from any desperate scandals.

Joe Smith is tall with a height of 6 ft 10 inches and weighs around 102 kg. His eyes and hair are black. Besides this, there is no information about his shoe size and dress size.