Updated On November 25, 2022 | Published By: Donnie Smith
Share this
Divorce 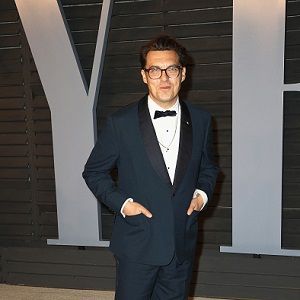 Who is Joe Wright dating?

Currently, he is seeing another woman. Her name is Haley Bennett.

Who has he dated in the past??

Previously, Joe Wright engaged actress Rosamund Pike in 2007. But in 2008, the wedding was called off.

He then tied the knot with the daughter of Ravi Shankar and half-sister of Norah Jones named Anoushka Shankar, sitarist on 26 September 2010.

However, the couple could not sustain their marriage relationship for long. Thus the couple got separated in June 2018.

Who is Joe Wright?

Joe Wright is a film director from London, England.

This film director was born as Joseph Wright to his parents, Lyndie and John on 25th August 1972 in London, England.

Besides, his parents had established the puppet theatre named the Little Angel Theatre in Islington. He belongs to the English ethnicity.

In discussing his educational background, he had left the school without any GCSEs cause of his dyslexia problem. However, he had taken drama classes from the Anna Scher Theatre School.

On talking about his career, firstly, he initiated his career through his parents’ puppet theatre. He then performed on camera and stage professionally after taking classes at the Anna Scher Theatre School.

Further,  the producer offered him the script for the serial Nature Boy after the success of the short film that he had made for BBC.

Moreover, he served at a music video production company named Oil Factory which was based in Caledonian Road, Kings Cross during the 1990s.

Furthermore, he served with several roles on a variety of productions including casting director. Also, he directed some music videos there.

In addition, he also served part-time for Vegetable Vision as a roadie.

He earns a decent amount of salary from his career but currently has not mentioned it to the public.

On talking about his awards and achievements, he had won a BAFTA award for Pride & Prejudice for the best newcomer.

He knows to maintain his professional life and personal life better than others. Also, he has been keeping his personal details far from the media.

Thus, currently, the records of his rumors and controversies are unavailable.

Joe Wright has a height of 5 feet 9 inches and a body weight of 87Kg.

This actor seems to be far from the media. He does not use Facebook, Instagram, and Twitter. But also he has been popular among the public.

Also, read the salary, career, net worth, controversy, rumors, and the bio of an actor, Marc Maron.