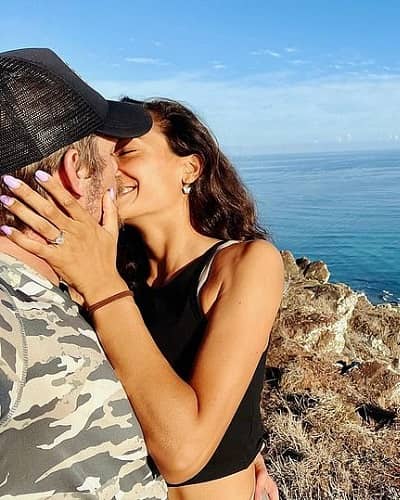 Joel Kinnaman and Kelly Gale are committed to each other. The two have decided to rest of their lives together. On 18th January 2021, he announced his engagement with Victoria’s Secret Model Kelly.

Joel shared a picture of him proposing Kelly with a ring and captioned it,

Likewise, Kelly also posted about the engagement sharing a picture of them kissing with the ocean in the background. Talking about her engagement ring it is a gorgeous round diamond set on a  pave platinum band with the main stone taking up a large piece of real estate on her finger.

Joel Kinnaman and Kelly Gale have been dating each other since 2019. They were first spotted together walking holding hands at the Coachella Valley Music Festival in Indio, California.

When a fan asked her about her relationship with Joel on Instagram, she revealed,

Kyle is a Swedish-Australian model who has worked for Victoria’s Secret, Playboy, and Sports Illustrated Swimsuit Issue.

Joel Kinnaman has an estimated net worth of $14million. In the year 2014, Joel purchased a home on the Sunset Strip for $2.245 million. His 2,500 square feet house features three bedrooms and 2.5 bathrooms. Likewise, the house features wood floors, large windows with superb views of the city, and a concrete-faced fireplace.

In 2016, he wanted to sell his home but due to the lack of buyers, she had to cut the price from $2.795 million to $2.35 million. Likewise, he bought a residence in Venice for $3.749 million which features 3,343 square feet with three bedrooms. Also, the house features wood floors, marble countertops, and a neatly-decorated yard.

His film work includes The Suicide Squad, The Secrets We Keep, The Sound of Philadelphia, The Informer, Edge of Winter, Suicide Squad, Child 44, Run All Night, Knight of Cups, RoboCop, Easy Money III: Life Deluxe, Lola Versus, Safe House, and more. His TV series work includes For All Mankind, Hanna, Altered Carbon, House of Cards, The Killing, and Andra Avenyn.

Also read Why is LeToya Luckett getting a divorce from her husband Tommicus Walker? Know about her wedding, children, net worth in 2020

Joel Kinnaman is a Swedish and American actor and he is best known for his role as Detective Stephen Holder in AMC’s ‘The Killing’, as Governor Will Conway in the U.S. version of ‘House of Cards’. He is also well recognized for his performance as Takeshi Kovacs in the first season of ‘Altered Carbon’. Read more bio…

These 10 Celebrities Broke The Internet When They Came Out As A Transgender!
Tags : Actress House of Cards