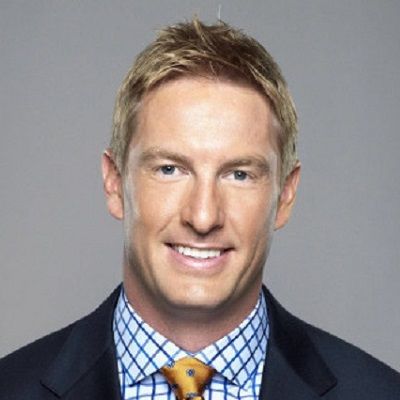 NFL Draft Analyst. Chat with players at the US Open. Father of 3 Boys - Husband to a Beautiful Wife.

What is the relationship of Joel Klatt?

Joel Klatt is a married man. He wed Sara Ordway in May 2005. They have three children together.

On 15th May 2015, Joel tweeted about his married life. He shared that he married his best friend 10 years ago and Sara is a wonderful mother. Likewise, he revealed his love for her.

Who is Joel Klatt?

Joel Klatt is an American Football commentator and analyst for Fox Sports. Joel was the first three-year starter at QB for Colorado since Kordell Stewart.

On 20th August 2003, he has announced the National Player of the Week in a match against Colorado State.

He has a brother Jason Klatt, a 5th-year coach at Mead High in Colorado. Recently, Jason was named the Denver Broncos Coach of the Week.

Joel attended Pomona High School in Arvada, Columbia. After that, he studied B.A. in Economics at the University of Colorado Boulder in Boulder, Colorado.

When Joel Klatt was a junior in high school he had 4 interceptions playing in the secondary, helping the team to a 9–3 record.

Joel was drafted in the 11th round of the 2000 Major League Baseball Amateur Draft by the San Diego Padres. He played for the Arizona League Padres led 12 doubles and batted .209 with 1 HR and 15 RBIs.

In the year 2002, he walked on to Colorado as a QB and played three games 0n the punt return team as a rusher/blocker against Missouri and Iowa State. In the next year, he earned a starting position at QB and set 19 school records.

Even though Joel was not drafted in the 2006 NFL Draft but he attended the Detroit Lions and New Orleans Saints rookie mini-camps. New Orleans signed him as a free agent.

Joel filled in as an analyst on Friday night high school football games in the Denver area in 2006 and since then his broadcasting career started. From 2007-08, he became the studio host for Fox Sports Southwest.

In August 2013, he joined Fox Sports and spent his first two seasons with FS1 and FOX broadcast networks. Likewise, he is a guest commentator weekly on the JOX Roundtable which is a sports talk show based in Birmingham, Alabama.

He owns a house in Manhattan Beach, California, US. In 2016, he wanted to sell the three-bedroom home for $1.7 million US.

Joel Klatt has blond hair and green eyes. He is 6 feet 1 inch tall and weighs around 82 kg.

You may also read the age, parents, career, net worth, body measurement and social media of Urban Meyer, Dennis Miller, and Andre Ware.