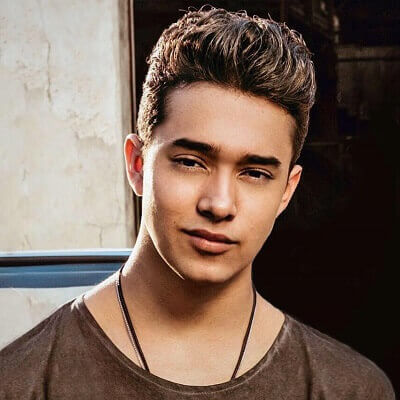 Joel is currently single. He is very shy when it comes to his personal life and so prefers to keep it private. As such we have no idea about his current or previous relationships. This might not be for long, however, as he is a heartthrob for many women and many want to date the young talented singer.

Who is Joel Pimentel?

Joel Pimentel is a famous Mexican singer of the popular Latin American boy band, CNCO. He is one of the five members in the band who has had huge success in their relatively short years that they have been active.

They came into the limelight after winning the singing competition show La Banda in its very first season. After that their albums went on to perform very well and so they have stayed near the top in the Latin pop genre ever since.

Joel Pimentel was born on the 28th of February 1999, in California, U.S. As of 2020, his age is 21. He was born to Mexican parents, Francisco Javier Pimentel (father), and Patricia P. de Leon (mother). He is one of their four children and also has 3 siblings; Emanuel, Israel, and Gabriel; among which Emanuel is older than Joel and Israel, and Gabriel are his younger brothers.

Joel was interested in music from a young age and that is one of the major reasons for his inclusion and success as a part of the band. He is of Mexican nationality. His ethnicity is Latin-American.

Joel was very interested in music from a young age and due to this, entered the Spanish singing competition La Banda which was in its very first season. There he and five other artists, Zabdiel de Jesus, Christopher Velez, Brian Colon, and Richard Camacho formed the boy band, CNCO. The band’s talents were recognized by the judges and they went on to win the competition also getting themselves a five-year contract with Sony Music Latin in the process.

The band gained a lot of fame and attention due to their amazing finale performance and win in the competition. This eventually led to them performing at the Time Square in New York on the 2016 new year’s eve. CNCO released its first album, First Appointment in August of 2016. This was their earliest project together but that didn’t stop it from winning the Latin American Music Award for Album of the Year in 2017 and selling over 60k copies in the process.

Their second album was self-titled and it saw even more successful than their first as it broke into the U.S. billboard top 200 chart reaching number 33. The album featured many impressive tracks. Among them, the single, Reggaeton Lento, was a breakout hit gathering over 1.5 billion views on YouTube within a year of its release. The band also earned a nomination at the Latin Grammys and won many other awards for this album.

The band has gathered a huge audience for their live performances and has performed with popular artists such as Ricky Martin, Ariana Grande, and Enrique Iglesias.

Joel stands at a height of about 5 feet 11 inches and weighs around 65 kg. He has dark brown hair and similarly, brown eyes.

Joel Pimentel’s exact net worth as of 2020 has not been revealed but several online sites estimate it to be in the region of $100k – $1 million. His band, CNCO has an estimated net worth of $4 million as of 2020.

Similarly, he hasn’t revealed his annual salary as he has many income sources and the amount they earn varies on their projects and live performances.

You may also like to read the Bio, Net Worth, Career, and more about Richard Camacho, Ricky Martin, Enrique Iglesias, and more.