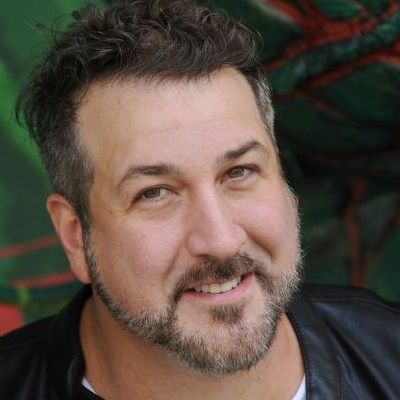 My Family Recipe Rocks' is on the Live Well Network, and we go to people's homes and watch them cook

It's fun to be able to have a fun palate, and the way I say that, you think about it and it sounds funny, but it's true

It's tough for those celebrity couples. It's really hard. My wife wasn't in the limelight, which made it easier... the key is to keep it happy, light, and fun.

Joey Fatone is currently married to Kelly Baldwin in 2004. However, they separated in 2015 and Joey filed for divorce from her in June 2019.

They met in 1994 and their wedding took place on Sep 9 at Oheka Castle, Long Island, New York. This couple is blessed with two children. Their first and second daughters Briahna Joely and Kloey Alexandra were born in 2001 and 2010 respectively.

His other affairs were with singer Pink in 2000 and Chyna who is a wrestler plus actress.

Who is Joey Fatone?

Joey Fatone is an American singer, dancer, and TV star. He is also an actor who has appeared in both TV and movies.

Mrs. Phyllis is a home-maker and Mr. Joseph is an actor plus musician.

He has an older sister named Janine and an older brother named Steven. He belongs to the ethnicity of Italian.

Regarding his academics information, he joined Joseph B. Cavallaro J.H.S. in Brooklyn, New York City.

After this, he enrolled and graduated from Dr. Phillips High School, Orlando.

Joey Fatone is a popular face of the entertainment industry. He has also appeared in a dance reality show, Dancing with the Stars. He first participated in 2004 for season 4 but ended as a runner up.

Then again in 2012 for season 15. This time also he was paired with Kym Johnson. But unfortunately, he got evicted in the second week. After this, Joey performed in its season 27 in 2018.

Joey was a member of a popular band NSYNC. It was formed in 1995 and was dissolved in 2002. The other members of this boyband were Justin Timberlake, Chris Kirkpatrick, JC Chasez, and Lance Bass.

This group has released its first album titled as NYSNC in 1998. Then in 2000 and 2001, their second and third albums No Strings Attached and Celebrity came out respectively.

Joey Fatone is doing great in both professional and personal. He has not been in any rumors and controversies yet.

But news about the separation and divorce from his longtime wife Kelly grabbed the limelight.

This singer and actor have an estimated net worth of $14 million. He has also endorsed brands like Anheuser-Busch Budweiser, McDonald, Nutri System, and Target.

Regarding Joey Fatone’s body features, he has light brown eyes and dark brown hair. His height is 5 ft 11 inches and weight is 87 kg.

He is also active on the Facebook page and has more than 17k followers. This account was created on July 27, 2012.