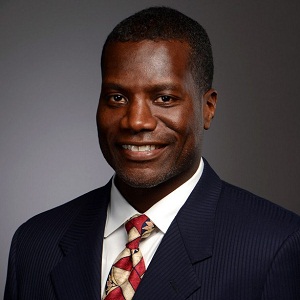 There are no any records of the relationship history and status regarding Joey Galloway in the mainstream media till date. He may thus, be living a single life or enjoying a relationship with someone else.

Who is Joey Galloway?

Joey Galloway is a former American football wide receiver in the National Football League and current college football analyst for ESPN. He was drafted by the Seattle Seahawks eighth overall in the 1995 NFL Draft and also played for the Dallas Cowboys, Tampa Bay Buccaneers, New England Patriots, Pittsburgh Steelers and Washington Redskins.

Galloway was born Joseph Scott Galloway on November 20, 1971, in Bellaire, Ohio, US. His nationality is American and ethnicity is ‎Afro-American.

Galloway played high school football at Bellaire High School. During his senior year, he was an All-Ohio choice in basketball and won the state championship in both the 100 and 200-meter dash in track.

Galloway played college football at Ohio State. While there he earned many honors & finished in the top 5 all-time in many of Ohio State’s receiving records.

Galloway was selected by the Seattle Seahawks eighth overall in the 1995 NFL Draft. He made an immediate impact for the Seahawks, setting franchise season records for a rookie with 67 receptions, 1,067 receiving yards & three 100-yard games. Joey also had success as a punt returner.

He continued with the team till 2000. On February 12, 2000, The Seahawks traded him to the Dallas Cowboys, who signed him to a deal that made him the second-highest-paid wide receiver in the league at the time.

He finished his career with the Cowboys with 151 receptions for 2,341 yards & 12 touchdowns. Besides the loss of the 2 first-round draft selections, his contract contributed to the salary cap problems that affected Dave Campo’s years as head coach.

On March 19, 2004, the Cowboys traded Galloway to the Tampa Bay Buccaneers for Keyshawn Johnson.

Galloway suffered a groin injury in the season opener against the Washington Redskins & was inactive for the next 6 games of the 2004 season. After the season, he re-signed with the Bucs. In 2005, he enjoyed his best season as a professional.

In 2007, he played in 15 games, making 57 receptions for 1,014 yards & 6 touchdowns, becoming the first player in franchise history to register 3 consecutive 1,000-yard receiving seasons. After starting the first 2 games, he suffered a foot injury that forced him to miss most of the 2008 season. He finished his career with the Buccaneers with 248 receptions for 3,912 yards & 28 touchdowns.

Galloway signed a one-year deal with the New England Patriots on March 14, 2009, as a free agent. Although healthy, he was inactive for Weeks 4-6 of the 2009 season due to a lack of production and difficulty in learning the Patriots offense. He was released on October 20.

On December 22, 2009, Galloway was signed as a free agent by the Pittsburgh Steelers. He was not re-signed by the Steelers at the end of the season.

Galloway signed with the Washington Redskins on April 28, 2010. He was waived by the team on November 27 & Terrence Austin was promoted from the practice squad to replace him. He had 12 catches for 173 yards in 10 games.

In 2012, Galloway joined ESPN as a college football analyst. He co-owned the Arena Football League team Columbus Destroyers from 2003 to 2008.

Joey Galloway: Salary and Net Worth

While his salary is not known, he has a net worth of $10 million.

There are no significant rumors and controversies regarding Joey Galloway to date.

Joey has a height of 5 feet 11 inches. His body weighs 89kg. He has black hair and dark brown eyes.