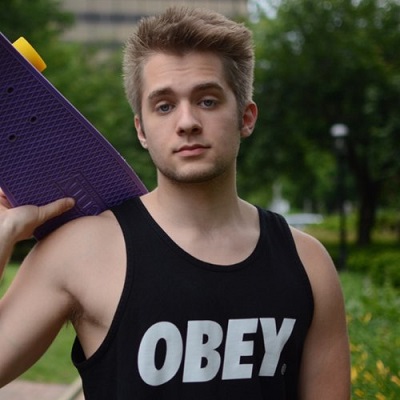 He likes to keep his personal life private.

On October 30, 2014, SDK uploaded a video JOEY GATTO’S BIG SECRET. In the description box, it was mentioned that if that video got 10,000 likes, they would reveal Joey’s new girlfriend in the next video.

Who is Joey Gatto?

Joey Gatto is an American YouTube star and Vocalist.

Gatto is a member of the collaborative channel Settle Down Kids and is popular on his self-titled personal channel ”Joey Gatto” where he uploads his songs.

He has three half-siblings from his father’s side, a brother and two sisters.

He is an undergraduate from Columbia University, New York, US where he did his major in Computer Science(CS Major).

Gatto launched his Youtube channel on November 30, 2012, under the name ‘Joey Gatto’.

The channel predominantly features a man on the street videos, vlogs and of course some great rap and music.

Some of his early videos that garnered attention include ‘Harlem Shake (Retirement Home Edition)’, ‘What Would You Do For A Dollar?’ and ‘Explain that pic! ft. Joe Santagato’.

With time the channel where he uploaded new videos every week started enjoying more viewership and popularity and presently has amassed over 178 K subscribers with a viewership count of more than 13K.

The most popular videos of his channel include ‘If Young Metro Don’t Trust You…’, ‘What Would You Do For A Dollar?’, ‘Do You Even Vape?’ and ‘The Truth About Jc Caylen’ among many others.

Besides his own YouTube channel ‘Joey Gatto’, he was also one part of the collaborative channel ‘Settle Down Kids’ on YouTube that was launched on June 22, 2013. The other members of this channel which are mostly known for posting funny and prank videos include Josh Sobo, Ryan Abe, Jonah Green, and brothers Nick Buongiovanni and Adam Buongiovanni.

The most popular video of the channel is ‘LEG WAXING CHALLENGE W/ TWAIMZ’ that featured YouTube star and Vine sensation Twaimz. Other popular videos of the channel are ‘How Do Youtubers Make Money?’, ‘Chance the Rapper – Cocoa Butter Kisses (Cover) Jonah’ and ‘How to Hack Twitter Accounts’ to mention a few.

Gatto was known to upload posts on the channel every Monday. The channel is gradually gaining popularity and has already garnered more than 194K subscribers and accumulated a viewership count of 234K.

How Much Does Joey Gatto Earn?

He has blue eyes with light brown hair color. He is 5 feet and 9 inches tall.

You may also know about the net worth, body measurements, and the early life of Jackson Mecham, Kate Elizabeth, and Carmen King.