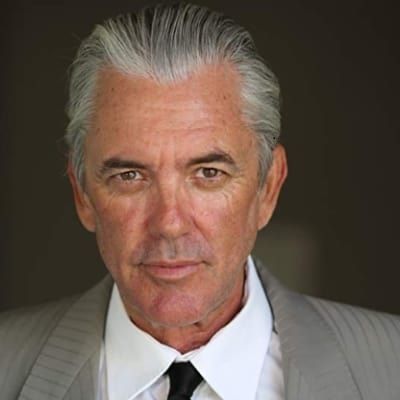 Facts of ‘Joey’ Joseph B. Sagal

They are seen together regularly in public places. For instance in the 28th March 2019 match between Los Angeles Dodgers Vs Arizona Diamondbacks in the Dodger Stadium Field, Sagal caught his first foul ball. He went totally ga-ga and posted pictures on the web any which way with the foul ball in his hand and Michelle beside him!

Sagal and Michelle take a time-out at the beaches with their pets Max the Pug, and Herc, a Tibetian Spaniel.

-Previously Joseph B. Sagal was married to Canadian Hanana Suzan-Stadner Sagal. They were married from 6th March 2011 to 10th June 2012.

Hanana Suzan-Stadner is an award-winning screenwriter, comedian, artist, and activist. Hanana is the screenwriter and co-executive producer of Elvis & Nixon for the 2016 Centerpiece.

Who is ‘Joey’ Joseph B. Sagal?

‘Joey’ Joseph B. Sagal is an American actor and writer. Joey was nominated for the 2012 Page Award for Writing, Category- Best Historical Film for the 2016 movie, Elvis & Nixon.

Joey is a living work of art. He embodies his characters with a flair- something like an individual with multiple-personalities. In his profession, he embodies important historical figures and actors like Richard Nixon, Elvis Priestly, and George Clooney, and does it like no other.

His internationally renowned movies are Elvis and Nixon, and Nightmares & Dreamscapes: From the Stories of Stephen King.

Also, Sagal’s father is the patriarch of the star-studded Sagal family. The late Boris Sagal was the director for the King of Kings Elvis Presley, who was then alive and well in the1965 movie Girl Happy.

Joey Sagal was born as Joseph B. Sagal on 12th February 1957 in Los Angeles, California, USA.

He is one of the five children born to movie director Boris Sagal, and Sara Maçon-Zwilling, the first woman director and singer. Sara died on 1st September 1975 in Los Angeles, California.

Joey’s father Mr. Sagal is of Ukrainian descent and immortalized by the movies he directed like the 1971 movie, The Omega Man, The Name of the Game, and Masada.

David Lewis Sagal is a Senior VP, Business & Legal Affairs at Warner Bros. at Burbank, California, and is married to actress McNally.

Catherine Louise Sagal was born on 19th January 1954, Hollywood, Los Angeles, and is older than Joey. She too is an actress and is married to Kurt Sutter, the creator of the 2008 series Sons of Anarchy and in which Katey is the protagonist.

Liz is an actress, screenwriter-script supervisor among others and is married to Bruce Grayson. She is renowned for the series Sons of Anarchy.

Jean Barbara is an actress and a director. She is the associate director for the prime-time series of 2 Broke Girls which was originally released on 19th September 2011. Jean has directed Two and a Half Men among others.

Daniil Sagal, the great Russian actor, is the paternal uncle of Joey Sagal and his siblings.

-More about their famous uncle Daniil- Recently in Russian Nights, A Cultural Experience, it was reported that Warner Brothers executive David Sagal and his sister, famed Hollywood celebrity Cathy Sagal, spoke before the screening of mark Donskoy’s Gorky’s Childhood starring their uncle Daniil Sagal, and recounted the history of their family.

Joey studied acting from 1975 to 1977 at the Lee Strasberg Theatre Institute, Hollywood, which has its institutes in New York and Los Angeles. His classmate here was Dominic Defazio.

From 1977-78, he studied speech, voice, dance, and movement with Edith Skinner at the A.C.T., or the American Conservatory Theatre, San Francisco, California, USA. Here he met up with Denzel Washington and performed his first play “Moonchildren” at the A.C.T, opposite Denzel.

He also studied script-analysis at Stella Adlers’ Studio of Acting, Broadway, in New York and then in Hollywood. And from 1979-1985, Joey studied acting with the world-famous actress, Peggy Feury.

Here he met and studied with Sean Justin Penn. Sean Penn was his beloved friend and also an actor-director. He was once married to the world-renowned singer Madonna.

Joey has the flair for the dramatic. He embodies the character he plays like no other. This is Joey Sagal Acting Reel in 2018. Take a look!

-Joey is the co-writer for the 2016 blockbuster Elvis & Nixon.

-An avid fan of Elvis Presley, he was Elvis Presley in Stephen King’s  2006 series Nightmares & Dreamscapes: From the Stories of Stephen King, then in the 2006 movie Unbeatable Harold, and is accredited as the “Elvis Announcer” in the 2007 speed thriller, Redline.

-He embodied “The Visitor” Elvis Presley for the World Premiere of the original Steppenwolf Theatre Company’s production of Steve Martin’s play, “Picasso at the Lapin Agile” that was performed at the Geffen Playhouse in Los Angeles, CA, US.

In his more than 357 performances, Joey character broke all box office records for The Geffen Playhouse and the Steppenwolf Theatre Company and also became the longest-running play with the drama actor Joey Sagal.

More about meeting the King of Kings Elvis Presley- Joey met Elvis on the set of his father’s 1965 film Girl Happy, which eventually inspired him to take the role of the Elvis-like character, The Visitor for the initial 357 performances of Steve Martin’s Picasso at the Lapin Agile.

In 2013, Not Another Celebrity Movie

-At the 2016 Tribeca Film Festival, Joey Sagal talks about working with Jerry Schilling, and about writing the historical Elvis & Nixon.

-You may also want to read about an interview with Joey Sagal along with the comments of a fan- ‘He is a guy who I will admit, I didn’t know I was following and enjoying for many years. A character actor to the core, he has literally shown up multiple times in completely different characters that I had no idea they were all the same person!’

Joey Sagal is the co-writer of the movie and also the actor in the role of the Elvis Impersonator. He was nominated for the movie in the category of Best Historical Film in 2012 PAGE International Screenwriting Awards.

Elvis & Nixon- Joey wrote the screenplay and played the character of the Elvis Impersonator for the movie Elvis & Nixon. Joey conceptualized the script in a get-together with his now ex-wife, Hanana Suzan-Stadner Sagal, and Cary Elwes.

More about Hanana Suzan-Stadner Sagal- Canadian Hanana Suzan-Stadner is an award-winning screenwriter, comedian, artist, and activist. In fact, Hanala made history in 1983 as the first vlogger when she first produced Cable TV’s “Shape it Up L.A.! This cable show ran from 1983-2000.

Hanala is the screenwriter and co-executive producer of Elvis & Nixon Centerpiece for the 2016 Tribeca.

Joey’s net worth is $10m US. As an actor, his earnings are $100k US. He also appears on TV talk and celebrity shows.

Joey has platinum hair and blue eyes, He is 6 feet /1.83m tall and has an average weight.

You may also want to read about the facts and life of celebrities like DBE. Dame Joan Collins and Natalie Wood.