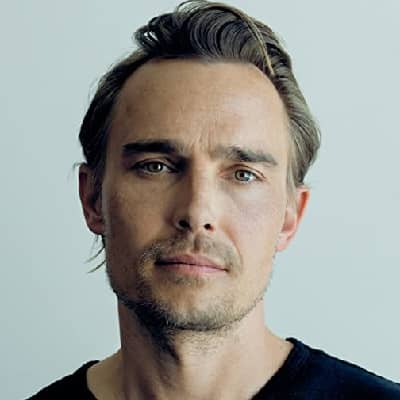 He is married to Gillian Rose. The exact date of their marriage is unknown. But Joey shared a picture of their wedding on his Instagram account on 20 Aug 2014.

They welcomed their first child daughter, Lily Lou Kern on 3rd March 2016, and another daughter, Rosie Irene on Jan 18, 2018.

Previously, Joey was dating Ginnifer Goodwin in April 2009. The couple also announced their engagement on December 24, 2010. But after staying together for a year, they broke up on May 20, 2011.

Who is Joey Kern?

Joey Kern is an American actor, writer, and director. The latest movie he has worked on as a writer and director is Big Bear.

He is popularly known for his roles in films like Cabin Fever and Playing with Guns.

Joey was born on September 5, 1976, in Independence, Kentucky, United States. His birth name is Joseph Daniel.

He has a brother named Kevin Kern, who is an actor. The names of his parents aren’t disclosed yet.

Joey holds an American nationality and is of mixed(German, Dutch, and Jewish) ethnicity.

In 1995, he attended St. Xavier High School in Cincinnati. After that, he has his Bachelor of Fine Arts (BFA) in drama from New York University.

While at NYU, he studied at the Royal Academy of Dramatic Arts in London.

At first, Joey Kern used to act on stage with different companies such as Atlantic Theater Company, New Group Theater, and Theatre for a New Audience. He has played the title role of Troilus in Shakespeare’s Troilus and Cressida.

Joey then made his feature film debut in the year 1999 appearing in Die Jungfrau (The Virgin), an Austrian film shot in Austria, Greece, and Egypt that cast Kern out of New York City.

He also had a guest appearance on the HBO series Sex and the City. Likely he was also seen in the role of the 2001 movie Super Troopers as one of the stoners.

He gains more popularity in 2002 after appearing in the movie Cabin Fever and then in 2003 when Grind was released. Then he appeared in various movies. At one point, he had 5 movies in post-production, including The Sasquatch Gang (released in 2007), All the Days Before Tomorrow, and One Part Sugar.

In 2007, Joey also co-hosted a week of Attack of the Show on G4. In 2010, he appeared in the TV movie, Playing with Guns, alongside Danny Masterson.

Kern was cast in a recurring role on TNT’s new drama series Good Behavior, starring Michelle Dockery, which ran two seasons. In 2017, Kern wrote, directed, and starred in Big Bear, which is based on his broken engagement to actress Ginnifer Goodwin.

Being one of the successful personalities, his net worth is said to around $ 1 million. Though the exact no is not disclosed.

Joey’s directed movie, Big Bear has able to collect around $600 thousand. He has good earning through his acting career also.

The actor is doing a great job with his personal and professional life. Till now, he has not been in any type of rumors or controversy.

Joey Kern stands tall with a height of 5 feet 11 inches and weighs 78 kg (163 lb). He has blond colored hair and hazel colored eyes.

Also, get to know the bio of other models like Charlie Riina, Alison Waite, and Roos van Montfort.