Joey Lawrence is an actor, singer, as well as a game show host. He is known for Mellisa and Joey show. He is married and has two children. 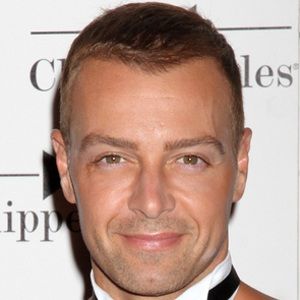 Breakfast is a big deal. I love it

I'm really into basketball, baseball, football and working out - but you'll never catch me in a public sauna

A career is a journey. I've been fortunate enough to work and be very successful over three decades, but I haven't achieved nearly what I want to achieve yet.

Joey Lawrence is a married person. He has married to Chandie Yawn-Nelson, while on vacation in Disney World when the two were teenagers. They wed there in July 2005.

The couple is blessed with two children both daughters namely Liberty Grace Lawrence and Charleston Lawrence. He hasn’t mentioned any of his future plans other than this.

Besides this, he had also married to Michelle Vella in 2002. But they had divorced in 2004. Likewise, he had also dated Kellie Martin, actress and dancer, Keri Russell in 1994, Katherine Heigl in 1995, and Kim Kardashian in 1999.

Who is Joey Lawrence?

Joey Lawrence is an actor, singer, as well as a game show host. He belongs to American society.

He has played many roles in movies, television series, etc. Some of his famous roles are as Joey Russo in Blossom, Joe Roman in Brotherly Love, and Joe Longo in Melissa & Joey.

Joey Lawrence was born on April 20, 1976, in Philadelphia, Pennsylvania, U.S. He is the son of Donna and Joseph Lawrence Mignogna Sr. His brothers are Matthew Lawrence and Andrew Lawrence.

His mother was a personnel manager and former elementary school teacher whereas his father was an insurance broker.

Besides this, he hasn’t mentioned any kind of information regarding his ancestry and childhood.

Joey was graduated in 1994 from Abington Friends School in Jenkintown, Pennsylvania. And then he had attended the University of Southern California. Besides this, there isn’t any information regarding this topic.

Joey Lawrence started his career at the age of five. He had appeared on The Tonight Show Starring Johnny Carson. Then in 1983, he appeared as a guest spot on Diff’rent Strokes and Silver Spoons. Until 1987 he had continued in that role.

From 1985, he debuts with the release of Summer Rental and had provided the voice of Oliver in 1988. He had also starred in the series Brotherly Love,  Run of the House, and has guest-starred on such programs as American Dreams.

Likewise, he had appeared on ABC’s Dancing with the Stars in 2006. He had starred in the Broadway hit Chicago as Billy Flynn in 2007 as well as starred in the television movie My Fake Fiancé with Melissa Joan Hart in 2009.

He had returned to television in the ABC Family sitcom Melissa & Joey, again opposite Hart. This series has been renewed for its fourth season in 2014.

Similarly, he had contracted to be a Chippendales dancer for a special engagement in 2012. In 2013 he had begun appearing in the ABC reality show Splash, which he co-hosts alongside Charissa Thompson. Besides this, he had also continued his music career.

At the age of 16, he had debut album Joey Lawrence which was released in 1993. In 2011, he had released his single,  which was available on ABC Family’s website.

Joey Lawrence has played many roles in films, drama as well as television series. But he hasn’t achieved awards neither he had been nominated for awards.

Joey Lawrence: Salary and Net Worth

This actor hasn’t mentioned his salary but his net worth is $400 thousand.

Joey has suffered from rumors as well as controversy. His recent activities say that he has a financial aid that had become controversial on the social site.

The actor has a height of 5 feet 8 inches and weighs 82kg. He has dark brown colored hair and his eye color is light brown. His shoe size is unknown.