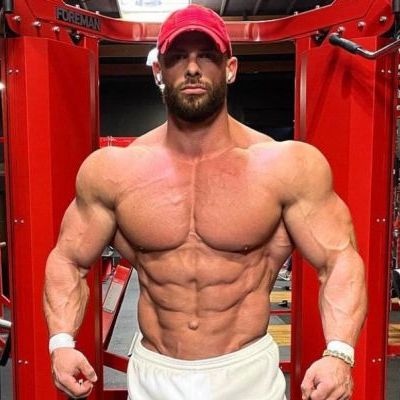 What is the relationship of Joey Swoll?

Trainer Joey Swoll is currently dating coach Crystal Renean. Crystal confirmed her relationship in 2018 through her Instagram account by posting their pictures together.

However, the couples are not engaged yet. But they seem to be in a very happy and healthy love relationship together.

Who is Joey Swoll?

Joey Swoll is a known fitness model, athlete, and bodybuilder. Joey Swoll is also an author and has published a book titled “Train Harder Than Me”. Similarly, he is co-founder of the Shredz supplement company.

Joey Swoll was born in Chicago, the United States of America on January 11, 1983. As of 2022, he is 39 years old and holds American nationality. His ethnicity is Caucasian and belongs to Capricorn. His real name is Joey Sergo.

This social media star has not disclosed his parents yet. However, he was raised in Chicago with his brother. Since his childhood, he was interested in and active in several sports activities like football. So, he also won some championships.

Moving on, he attended one of the local schools in Chicago. Later, he completed his high school level at the Maine South High School in Illinois. Then, Swoll shifted to another city to complete his education furthermore. Being in a new place and college was hard for him during the first semester. His colleagues and school seniors bullied him during his college days.

During his second semester, he began living in a cafeteria which was beside the local gym. That is when he found his new passion. He started going to the local gym and did heavy weight lifting which was the major breakthrough in his career.

Joey Swoll began weight lifting during the second semester of his college. Likewise, as time went on, he trained harder more often.

So, to avoid the group of people during afternoons and he began going to the gym quite late. After that, develop it as his full-time job and even though he told that it is his passion it never felt like a job for him.

Eventually, he starts passing his time by training the whole day and preparing meals or performing things related to fitness.

With ongoing time, his body structure begin changing and he gained lots of compliments from others, which was more motivating things for him.

He began doing exercises like cable flies, front barbell squats, pull-ups, and a flat bench. At a minimum, he used to do his training three times a day. Regarding nutrition, he started to avoid sugar.

But to increase his insulin he starts taking more glycemic. He also added clean meals with trim meats, white rice with vegetables and protein pancakes, and so on.

Joey Swoll gained more popularity in the media and the public after achieving his body transformation. He appeared on the front pages of the magazine showing off his changed body physique.

He even start influencing people through his Instagram which gained him more fame within a short period of time he got over 2 million followers.

To inspire his viewers to live healthy life he wrote and released his own book named “Train Harder Than Me”. In the book, he has mentioned bodybuilding secrets and tips.

In Jan 2022, one of the women was found criticizing Joey Swoll for the exercise he was doing on the Tiktok. The lady criticized him.

Overall, he seems to be very secretive about his personal life. So, he has not been involved in many rumors and controversies to date.

Joey Swoll has athletic body statistics, as he stands at the height of  5 Feet 6 inches and weighs around 93 Kg. His Chest and Waist sizes are 50 and 30 inches respectively.

Similarly, talking about his physical appearance his complexion is fair. He has dark brown eyes and dark brown hair.

There are several online profiles of Joey Swoll with a huge following. He has an Instagram account that has more than 2 million followers and he is also available on Twitter with about 52.7K followers. Similarly, he has an official Facebook page with around 258K followers.

Sam Faiers! Know about this English model and TV star’s second pregnancy, boyfriend, time on Celebrity Big Brother, Crohn’s disease and how it had affected her!