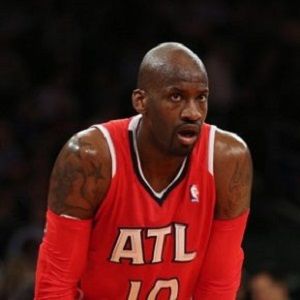 I was excited about the chance. I feel good about how I did and I want to get better. But this was a good start

For everybody else, it was a good game, but not [for] me. I'm happy for them, but I feel very bad. This isn't how I wanted to end my first year

I think it's been a regular season for a rookie, but I really don't know. I'm not satisfied. I think I can do a lot better.

Reflecting on the personal life of Johan Petro, he is a married man. He is married to his longtime girlfriend, Venessa Petro. There is no information on their wedding details.

His wife is a fitness freak like himself. He along with his wife Vanessa owns the Lagree Fitness Method in Palm Beach County.

The couple loves Southern Florida because of the weather, the beach and the lifestyle. The couple does not have any children yet.

Who is Johan Petro?

Tall and handsome Johan Petro is a well-known French professional basketball player. He has played for French national basketball team and has won French League title in 2004 for ElanBearnais Pau-Orthes.

French professional basketball player Johan Petro was born in Paris, France on 27 January 1986. He is of Guadeloupean ethnicity and has French nationality.

Johan migrated from place to place during his childhood days because his father had changed jobs. So from Paris, they went to St. Martin and from there they shifted to Guadeloupe when he was six. He was raised with his two sisters, Axelle and Marjorie.

Talking about the career journey of Johan Petro, he started playing basketball professionally after joining ElanBearnais Pau- Orthez. In 2005 he signed with Seattle SuperSonics of National Basketball Association (NBA) then he joined Oklahoma City Thunder.

In 2009 he was traded to Denver Nuggets but Nuggets declined the trade making him a free agent but soon resigned him on 27 August 2009. On 10 July 2010, he signed a three-year contract with New Jersey Nets and traded him to Atlanta Hawks on 11 July 2013.

After recovering from injuries Petro signed with Mets de Guaynabo of the Baloncesto Superior Nacional but he was soon released on 14 April 2015. On 2 February 2016, he signed with Leones se Ponce and after a year on 24 February 2017, he joined Sioux Falls Skyforce of NBA Developmental League.

He was released from the team on 23 March 2017, and since then he has been a free agent. His success in the career path has paid him well financially.

Johan Petro: Salary and Net Worth

He hasn’t been in any rumor but he suffered a controversy for being the worst big man in NBA.


Johan has the height of 7 feet. His body weighs 112kg. He has black hair and dark brown eyes.