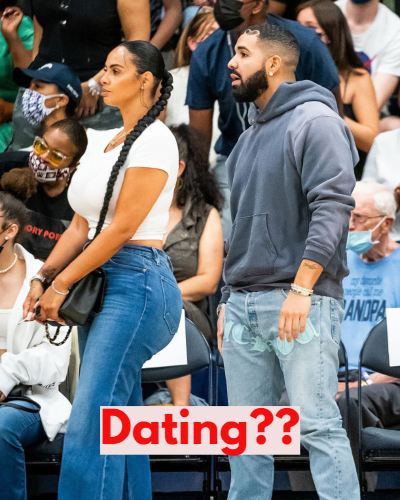 Johanna Leia has successfully stolen the heart of Drake. On 8th July 2021, the rapper had a romantic dinner with Johanna at an empty Dodger Stadium. The couple has been secretly dating for months. A Twitter user Chris Cristi wrote,

“@DRAKE ON A DATE? Randomly just flew over this cozy couple enjoying a private dinner along the third base line at an empty Dodger Stadium from #Air7HD @ABC7 #Drizzy”

It is said that the two were introduced earlier this year through high school basketball, as Johanna’s son, Amari Bailey. Drake has been mentoring Amari who is preparing to attend UCLA in 2022. They were given the opportunity of a private date by the Dodger Stadium for his donation to the Los Angeles Dodgers Foundation.

Also read Yet another reunion! Rappers Nicki Minaj and Drake are back to being friends again

What does Johanna Leia do for a living?

Johanna Leia is not a new person in the spotlight as she has starred on Lifetime’s Bringing Up Ballers. The series followed Leia and four other Chicago area entrepreneurs who will stop at nothing to ensure that their businesses are successful and their boys are on track to make it to the NBA. It showed how the ladies balance their households and businesses while managing their sons’ daily practices and games.

She is from Los Angeles and grew up in the Chicago area. She moved to LA with her family and revealed,

“I think it was an easy decision. Life is about growth, and life is about change. I started businesses here. I’m rooted here.”

Johanna Leia has a son Amari Bailey who is a school student and plays LeBron James’ son Bronny James. Her son is extremely talented and has committed to play basketball at UCLA after the university recruited him. Likewise, Amari was ranked #3 in ESPN’s class of 2022 recruitment list, meaning he’s one of the best teen players in the nation.

Also read Rumors of Kylie Jenner dating rapper Drake emerge! What is the reaction of her ex-boyfriend and baby daddy Travis Scott to them?

Firstly, he was recognized as an actor in the teen drama television series Degrassi: The Next Generation.

During 2007, he released his debut mixtape, Room for Improvement. Furthermore, he has released two independent projects Comeback Season and So Far Gone. Read more bio…