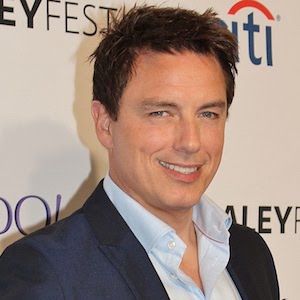 Yet if I was asked to do this again - in fact, if I was ever asked to repeat any of my experiences - I'd have to say, fuck it, bring them on. I've no regrets. This is what it means to be alive

John Barrowman is gay and he is married. He is married to Scott Gill who is an architect. After being in a relationship with Scott for 22 years the couple finally got married on 2 July 2013.

They tied the knot in California the day after  California Supreme Court overturned the ban on same-sex marriage. The couple also took vows in Civil Partnership in London in 2006.

The couple doesn’t have any children but when asked, John meekly replied he wouldn’t mind having one.

Who is John Barrowman?

John Barrowman a versatile Scottish-American best known as TV actor and presenter and is also a singer and a writer.

He is well known for his self-produced program in the CBBC Tonight’s the Night and his role as Captain Jack Harkness in the science fiction series Dr. Who and Torchwood.

John was born on 11 March 1967 at Glasgow, Scotland. He is the youngest child of John and Marion and has a sister Carol and a brother Andrew.

His mother was a singer and worked as a clerk in a record shop while his father worked for Caterpillar. In 1975 his family was relocated to Aurora, Illinois by his father’s company where his father managed the Caterpillar Tractor Factory.

He studied at Joliet West High School where his music and English teachers inspired him to pursue his love for performing and enriched his true artistic potentials.

With support from his teachers, he was able to compete with other schools in statewide speech competitions where he furnished his skills reading scenes for plays. As a freshman he won parts in several musical productions such as Oliver!, Camelot, Hello Dolly!, Lil Abner and Anything Goes.

He spent the senior years of his high school shoveling coals for an Illinois Power company but he didn’t like the job. He graduated in 1985 and became a naturalized citizen of The US but maintains dual citizenship of The UK and The US.

John Barrowman started professional acting in 1989 at Prince Edward Theatre with the role of Billy Crocker along with Elaine Page and Bernard Cribbins in the Cole Porter’s Anything Goes in West End, London.

He continued appearing in the West End Productions for the next decade in production like Matador, Hair, The Phantom of Opera, Miss Saigon, Sunset Boulevard, Beauty and the Beast, etc.

Featured on more than a dozen musical theatre recordings, Barrowman has accrued places on the UK Album Chart for his albums Another Side (2007) and Music Music Music (2008). His self-titled album John Barrowman (2010) that hit number 11 on the chart is his highest chart placing to date.

Apart from performing in stage Barrowman is also a TV Presenter. He presented  TV programs like Live and Kicking, a children’s Saturday morning variety show on the BBC, and The Movie Game (1994-1996).

John was also a regular presenter on Channel 5’s afternoon show named 5’s a Company from 1997-1999. He hosted in the year 2013-2014 for BBC One and Channel 4 in Pressure Pad and Small Animal Hospital respectively.

His theatrical background allowed him to be the judge of various musical talent shows like How do you solve a problem like Maria? Anything will Do and I will do anything.

Barrowman’s salary details are unknown. His net worth is $4 million.

John often gets into controversies either be it his homosexuality or his public comments on transgenders or his flamboyant styled outfits.

Recently his sparkly blue tardis outfit has grabbed a lot of attention among paparazzi and critics as to whether his attitude intends to serve as a mockery to women ridicule feminism.

However, he has denied critics saying he never meant to be sexist or transphobic.

John Barrowman is 6 feet tall and has an athletic body type. The color of his hair is dark brown and his eyes are blue. Information on his dress and shoe size is unknown.