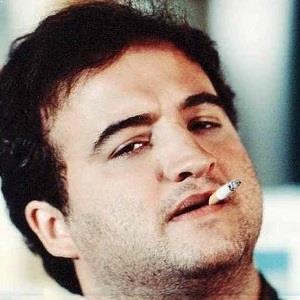 Some comedians love their characters. I don't fall in love with mine. In fact, I get tired of them very fast. You have to be willing to throw it all away.

Back in Chicago, all we cared about was rock 'n' roll and staying out of the army.

I give so much pleasure to so many people. Why can I not get some pleasure for myself?

[how he acquired the nickname 'Wrestling Shoes from his cousins] They were a couple of years older and much funnier than me. Every time I opened my mouth, they would cut me down. We were playing poker one New Year's Eve, and they won all my money. I left the table and suddenly burst into tears. They asked me what was wrong, and I said , "That was for my wrestling shoes". So they called me Wrestling Shoes ever after.

John Belushi was in a relationship with Bambi Woods during 1978. He was later married to Judith Belushi-Pisano for 5 years before his death.

Who is John Belushi?

John Belushi was an American actor, comedian, and singer. People recognize him for his sketches in the NBC sketch comedy show ‘Saturday Night Live’ (SNL). Additionally, during his career, he also appeared in numerous movies including ‘The Blues Brothers’, ‘Neighbors’ and ‘1941’.

Belushi was born in Humboldt Park, Chicago, Illinois on January 24, 1949, to parents Agnes Demetri and Adam Anastos Belushi. Throughout most of his childhood years, he was raised in Wheaton. He had three siblings, younger brothers Billy and Jim, and sister Marian.

Talking about his education, Belushi attended Wheaton Community High School. Furthermore, he was also enrolled at College of DuPage.

Belushi initially formed a band alongside Dick Blasucci, Michael Blasucci, Tony Pavolonis and Phil Special and they were called the Ravens. The project, however, did not work out as expected.

Later, he began his own comedy troupe in Chicago. Eventually, he began working for ‘The National Lampoon Radio Hour’ as a writer, director, and actor.  Michael O’Donoghue recommended Belushi to Lorne Michaels as the member of ‘SNL’. This became the stepping stone for his successful ‘SNL’ career.

Belushi portrayed numerous characters like Samurai Futaba, Henry Kissinger and Ludwig van Beethoven over his four-year tenure at ‘SNL’. Apart from his career in this TV show, he also appeared in numerous other movies and television series including ‘Continental Divide’, ‘The Blues Brothers’, ‘Old Boyfriends’, ‘Things We Did Last Summer’, ‘Goin’ South’, ‘Animal House’ and ‘Shame of the Jungle’ among others. Additionally, he also had 5 credits as a writer and 12 credits for soundtracks. Belushi died on March 5, 1982, due to combined drug intoxication involving cocaine and heroin.

Throughout the end of his career, Belushi had a total net worth of $ 2 million.

There was a rumor that Belushi was in a relationship with Cathy Smith however, there is no confirmation of this news. During his career, he became part of several controversies due to his common habit of combined drug intoxication.

Talking about his body measurement, Belushi had a height of 1.73m. Additionally, he weighed around 101 kg. Furthermore, his hair color was dark brown and eye color was blue.