The spotlight after becoming the first top prize winner on the United States version of Who Wants to Be a Millionaire.

The 49-years-old, John Carpenter is a married man.

He tied the knot with his long-time girlfriend Deborah after dating her for a couple of years.

The couple first met in 1996 when she was studying for a master’s degree at Southern Connecticut State University.

The couple got married in August 1998.

However, there is not any information regarding his children.

Apart from her, he has never seen anyone in the public and media and has never been involved in any affairs.

Currently, John and Deborah are enjoying their married life and living elegantly. 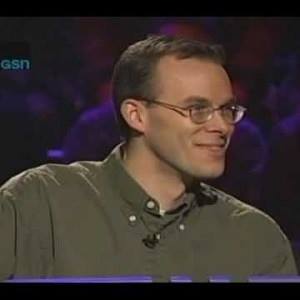 Who is John Carpenter?

John Carpenter is an American game show contestant and IRS agent as well.

He came into the spotlight after becoming the first top prize winner on the United States version of Who Wants to Be a Millionaire.

During his game, he went through the million-dollar question without using any lifelines.

John was born in 1968, in Hamden, Connecticut, United States.

He is the son of Tom Carpenter and Gail Carpenter.

He holds an American nationality and belongs to the Caucasian ethnicity.

Concerning his education, he completed his graduation from Rutgers University in 1990 with a degree in economics.

John began his career in the Internal Revenue Service after completing his exams.

At the age of 31, he appeared in the Who Wants to Be a Millionaire. During his first 14 questions, he didn’t use even a single lifeline.

In the $1 million questions, he used his Phone-A-Friend lifeline to call his father, not for help, but rather to inform him that he knew the answer and he is going to be a millionaire.

After his victory, John also became the first contestant in the worldwide Millionaire franchise to win the show’s top prize.

Besides this, he played himself in a Saturday Night Live skit.

In the show, Donald Trump, played by Darrell Hammond.

Additionally, he has also appeared in a couple of shows such as Good Morning America and Late Show with David Letterman.

Moreover, John featured himself in the second half of the fourth season of Oz.

In a TV game show, hosted by Gordon Elliott, he played a contestant. Later, he also took participated in other game shows such as Mob on NBC’s 1 vs. 100 and on the Game Show Network game show Grand Slam.

Being the winner of Who Wants to Be a Millionaire as well as the IRS officer, he earns a decent amount of money from his profession.

Talking about his personal earnings, His net worth missing.

Furthermore, he has never been involved in any controversy to date.

It seems he has a full concentration on his work rather than being stuck in any controversy.

Moving towards his body measurements, John has a pair of blueish-green eyes and brown hair.

Furthermore, there is not any information regarding his height, weight, and other body measurements.

John is not active on social media at all.

Tags : IRS agent Winner of Who Wants to Be a Millionaire