John Cena and Fiancee Nikki Bella Celebrating Bella’s YouTube Milestone by Getting naked!!Jone Cena: ‘My Tube’s on YouTube!’…Enjoy the ride! 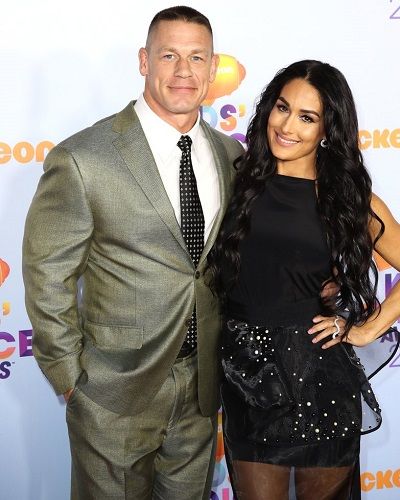 Is it a new way to celebrate by getting naked? Celebrities John Cena and his to be wife, Nikki Bella celebrated Bella’s 500k YouTube subscribers. By uploading a sexy nude video, they thanked their fans and subscribers.

WWE celebs. John and Nikki were just engaged and together they made a video to celebrate 500k subscribers. Bella said,

“We are finally ready to have this huge celebration. Sorry it took a few days. It took a while to convince someone to do this. This is a very good idea because why? We got half a million subscribers! So, we are ready to give all of us to all of you.”

Before they made a video, John was seen telling,

“I still don’t think this is a good idea.”

Isn’t it cute? However, their private parts were blurred and while celebrating, John humorously said,

For which Nikki replied,

“I think my, uh, yeah … everything is on YouTube!”

To add more humor, John Cena bent down towards Nikki and made a fart noise and Nikki replied,

“What the f–k? Are you kidding me? God, what did you eat? Someone else’s farts? You honestly ruin everything.”

John Cena, best known as WWE Superstar John Cena, is an American professional wrestler best known for his times on WWE Raw and WWE SmackDown. He is also a reality television show host, rapper, and actor known for his roles in the movies The Marine, Legendary, Fred: The Movie and 12 Rounds. – See more bio at…

Nikki Bella is a famous American wrestler, actress, and model. Her real name is Stephanie Nicole Garcia-Colace. She is best known for her time in WWE Raw and WWE SmackDown. Nikki is the twin sister of former wrestler and model Brie Bella. She is famous as Bella Twins, a tag team with her sister Brianna. – See more bio at…